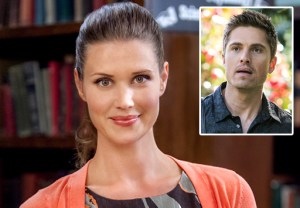 A Raven is landing in East End.

Lancaster will play the stunning Raven Moreau, who arrives in East End as part of a life-long “secret mission,” though she quickly develops a physical attraction to one of the Gardiner boys (hint: his name rhymes with “Smash”) that could derail her big plan. Raven is described as “smart, confident and in control,” but as we all know, that only gets you so far in East End.

Since appearing on NBC’s Chuck, which wrapped in 2012, Lancaster has starred in a string of TV movies, including The Preacher’s Mistress and Looking For Mr. Right.

Witches fans, any thoughts on Raven’s casting? Drop a comment with your theories about Sarah Lancaster’s character below.