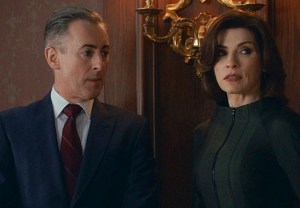 Necessity may be the mother of invention, but reinvention proved the mother of sensationally gripping drama on Season 5 of The Good Wife.

Alicia and Cary left Lockhart-Gardner to launch their own rival law firm — with Will and Diane declaring war in the wake of what they perceived as a huge betrayal. Then, just as the show’s main characters began to accept this new normal, Will was shot and killed in a senseless act of courtroom violence. His death set off yet another chain of unpredictable events that ended with Diane angling to join Florrick-Agos, Alicia relegating her marriage to Peter to one of political convenience and Eli getting a flash of inspiration that Alicia should challenge weaselly James Castro for his position as state’s attorney.

That last twist — along with Peter flirting with the idea of an affair with an intern, and Cary & Co. considering Diane’s offer to bring her clout to their struggling firm — could provide fertile seeds for Season 6 of the winner for best drama series at last weekend’s 2014 Television Critics Association Awards.

Executive producer Robert King already told TVLine back in May, before the show’s summer break, that intitially, Alicia will think Eli’s idea of her running for office is “the stupidest idea she’s ever heard,” but that “there are going to be events that push Alicia to consider this idea [of running for office] more seriously.”

That tease became more of a reality when, last week, Rescue Me‘s Steven Pasquale was cast for a two-episode arc as as a campaign expert courted by Eli Gold to manage Alicia’s possible run for state’s attorney.

Now the question looms: Will Alicia ultimately decide for or against a run for public office? And if she does throw her hat in the ring, will she come out a winner?

Review our poll options below, then make your predictions for The Good Wife’s sixth season.