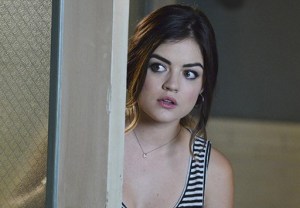 “This is about lies and whispered conversations that stop when someone walks into a room.”

And just like that, Spencer sums up everything this week’s episode of Pretty Little Liars is about.

But that’s not the only realization to be had in Tuesday’s episode. Read on to see what else the Liars got up to.

NURSE WRETCHED | Aria’s volunteer work has her helping out during the art class, and when she slips Bethany’s drawing into a pile of prints, it immediately catches the eye of one of the patients who claims it’s hers — and she’s none other than Bethany’s roommate, Rhonda. Later Aria sneaks into the girls’ room, but her investigation is cut short when Rhonda returns, causing Aria to scramble and hide under a bed – which just happens to be Rhonda’s. Luckily, Aria finds Bethany’s sketchbook hidden under there, grabs it and manages to sneak out, running into Eddie on the way.

Once she confirms that she knows Ezra, she rushes over to Spencer’s house, where they pore over the drawings in the book and Aria asks Spencer if Ezra mentioned her (because you know, priorities). Amid all this boy-talk, the girls piece together that Bethany might have been the “fragile patient” also on the Radley roof the night Toby’s mom died. Dun. Dun. Duuuunnh! (Side note: Has Aria attended enough class to know who Chagall is?)

THE GUEST-ING GAME | Emily’s mom invites Alison and the other girls to dinner. She also offers “an ear attached to an adult” but there’s no way any of the girls will ever take her up on that offer. Emily then freaks out because: a) her mom’s making popovers and b) she doesn’t want Ali to be the only other person at dinner with her and her mom. So despite Hanna’s “epic excuse” of cramps, she drags her friend (who is now very over Alison) to her house for what is quite an uncomfortable dinner: Conversation swirls around the lack of “bad luck” discount on their windows and Alison blaming herself for being “kidnapped.” After their guests leave, Emily’s mom admits to trying to play matchmaker for her daughter and Alison, then confirms Hanna’s comment about not believing Alison’s story. (Side note: Can Emily’s mom show up any time characters need to have a much-needed conversation?)

HALEB-LUIAH | Hanna runs into Caleb reading Swamp Thing because he has excellent taste and discovers he’s there to take his high school exit exams (“If they ask me who signed the Emancipation Proclamation, I’ll say Daniel Day-Lewis.”). Then, when he shows up at her house and tells her he walked out of the test (“Algebra and civics don’t mean a thing in the real world”), she kicks him out. That doesn’t mean that Hanna doesn’t still have feelings for everyone’s favorite Rosewood returnee, because when Alison hints that she doesn’t approve of him, Hanna says, “He’s the most un-mistake thing in my life.” (We’re going to ignore the phrasing and focus on the sentiment.) Later, when Caleb walks into the coffee shop, he and Hanna ignore the fact that he bought three brownies and instead discuss their relationship. It’s not long before they kiss, signalling that Haleb is back on!

I SPY | Spencer agrees to help Ezra move all his research to his friend’s shed; in the process, they bond over past mistakes (“Families can be hard”) and how they each made things worse. Spencer then borrows one of Ezra’s cameras to spy on the barn because she still doesn’t trust her sister — or her father, for that matter. Later on, the camera picks up not only footage of Melissa walking into it the barn, but Alison walking by it. Spencer then brings it up when she and Aria arrive at Emily’s house, and good ol’ Ems points out that Alison’s not dressed the way she was at dinner. Aria then adds that Ezra told her that Eddie called and asked to meet, but never showed up. That’s when A sends them a text that blames “Hanna’s big mouth.”

Now it’s your turn. Anyone else think that Sydney is the new “A” minion? Where is Toby? Isn’t “Mona’s Secret Ninjas” a great band name? Drop your theories in the comments section below.