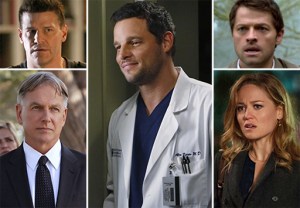 Question: Do you have any scoop on Grey’s Anatomy, especially on Jackson and April or Jo and Alex? —Carly
Ausiello: I choose Couple No. 2, though as far as Shonda Rhimes is concerned, their romantic status is not Alex’s No. 1 priority as the new season opens, picking up barely a day later. “Alex and Joe are in an interesting place — though I don’t know if I would talk about them in terms of their relationship just yet, just because thats not really the focus at the moment,” the Grey’s creator shares. “Cristina has left him these shares and the seat on the board, and what that means for him is complex. Does he want that? Is that what he’s looking for? Did he want the money grab that [private practice] provided him, or does he want to be the guy who has a seat on the board? It’s a big deal for him to figure out what he wants.” Bonus Grey’s Scoop: Kevin McKidd is directing the season premiere!

Question: What can you tell me about the Season 6 premiere of Parenthood? —Daniel
Ausiello: Two things: The episode is, curiously, titled “Vegas.” And it will mark the introduction of a character that has me worried about an already-troubled couple’s future. The dude in question is named Chris, and he’s Julia’s ex-boyfriend from law school. Apparently, they end up working together at her new job.

Question: Do you have any scoop on Bones‘ Booth and Brennan? —Amelia
Ausiello: The premiere picks up four months after the happy couple’s house got destroyed in a hail of gunfire (an incident that landed Booth in the hospital and in handcuffs). “For practical reasons that you’ll see, it has a very big effect on their marriage,” exec producer Jonathan Collier says of the FBI quagmire. “Booth has to deal with the legal consequences of where they ended up.” On the topic of B&B giving Christine a younger brother or sister, fellow EP Stephen Nathan would only confirm that “the Bones world will be expanding” in Season 10. Might a different pair find themselves with child? “That’s possible,” he teases. “Families grow. People have children.”

Question: Can you give any scoop on Sleepy Hollow? —Kate
Ausiello: Look for Jenny and Abbie’s relationship to “get deeper” in Season 2, per Nicole Beharie. “They’re a lot closer because they’ve faced the tribulations, and they’re learning more about their family — mom, dad, all that kind of stuff,” she explains. “But a few people step into the situation and put a wrench into it, and they end up butting heads.” Question: I need something to survive the Supernatural hellatus! —Katherine
Ausiello: I see what you did there. You took hell and hiatus and smushed them together. That’s some clever wordplay. Here’s your scooprize: Scottish actress Ruth Connell (pictured, right) is joining the cast in the pivotal recurring role of Rowena, a mysterious old-school witch who, rumor has it, is looking to reclaim her power base.

Question: Do you have any scoop on Supernatural and Demon Dean? —Joanna
Ausiello: Wondering how Cas will handle his buddy’s new persona? Well, first he’ll have to find out about it. “He doesn’t know what happened to Dean,” executive producer Jeremy Carver tells TVLine. “You’ve got to remember, Sam put Dean down on the bed dead. [He] comes back in the room [and] Dean’s not there. So no one knows what happened.”

Question: Any news on Jennifer Love Hewitt’s Criminal Minds character? —Michael
Ausiello: Turns out that the the BAU team previously made the (off screen) acquaintance of J.Love’s character — because FBI agent Kate Callahan apparently was on hand for their bar-closing karaoke night last season. Nonetheless, they’re a bit startled by the way she resurfaces in their world. “You see [Kate] doing something you don’t see our team ever doing, which is schmoozing with a bad guy, working undercover to take a pedophile down,” show boss Erica Messer shares. “We’ve never seen our team pretend to like a criminal, so right off the bat she’s different in that way.”

Question: Have you got any scoop on Season 12 of NCIS? —Tara
Ausiello: As showrunner Gary Glasberg previously told TVLine, coming off a season that 1) wrote out Ziva, 2) added Bishop, 3) planted the seed for a new spin-off and 4) accounted for Ralph Waite’s passing— and thus ended on a quiet, cliffhanger-free note — “the idea was to come out with a bang.” And the Sept. 23 premiere will do just that. “We’ve got a really significant season opener that brings Gibbs and McGee to Russia for a really big story. A crisis comes up and we immediately launch with a significant adversary who will pop up throughout the rest of the season,” played by Russian actor Alex Veadov.

Question: I’m still not over the death of Downton Abbey‘s Matthew. Please tell me we won’t be losing anyone else in Season 5! —Kate
Ausiello: You might want to sit down for this one, Kate. “No one’s safe,” executive producer Gareth Neame tells TVLine — rather bluntly — about the PBS drama’s fifth season, which premieres Stateside on Jan. 4. “We’ve lost so many key characters already. Although the show’s only been on for four years, we’ve actually covered 10 to 12 years, so it’s reasonable that within any family, there’d be deaths in that timeframe.” (In other words, have your funeral attire ready, just in case.)

Question: Any chance you have a scoop on The Blacklist? —Stephanie
Ausiello: Because it’s never too early to be talking about the NBC hit’s midseason time slot change, EP John Eisendrath told us that while the Super Bowl episode will pick up the fall finale’s cliffhanger (airing Nov. 10), that super-special Sunday showcase also needs to be accessible to noobs. “We need to have a reason for people to need to come back when we move to Thursdays [at 9/8c, starting Feb. 5],” he allows, “but… we hopefully design a story where if you’ve never watched the show, you still will be able to enjoy it.” Because unlike 2013’s post-Super Bowl show, Elementary — which, being on CBS, is less-serialized — “We have to be more judicious. That is the challenge.”

Question: Will Zoe Jarman be getting a decent send-off on The Mindy Project? I love Betsy! – Nina
Ausiello: Not necessarily, Nina, but don’t fret just yet. Betsy may not receive a huge goodbye party because the show wants to use her as much as possible this season. “Budget-wise, we had to rearrange things, and she has a new job,” executive producer Matt Warburton tells TVLine, calling the woman behind the naïve receptionist “a tremendous actress” and adding, “We want to use her whenever she’s available.” But will we see her in the season premiere? “We have not settled on that, but we’d love for her to be.” In other Mindy Project news, did you hear about this?!

Question: Any new casting news for Scandal since Harrison left the show? —Jennifer
Ausiello: This scoop is rated “T for Tentative,” but I hear the show is looking to add a new recurring character to the mix who is described in the casting notice as an African-American lawyer in his 30s to 50s. There’s no timetable for the newbie’s arrival, and the whole thing could be scrapped if Shonda Rhimes doesn’t find the right actor. (She already made it pretty clear that she’s in no rush to beef up the cast.) Also worth noting: This is not a Harrison recast. Question: Do you have any scoop on any DC heroes or villains coming to Arrow or The Flash? —Michael
Ausiello: I’ve got some explosive scoop on this one (you’ll see what I did there in a minute): Sgt. Bette Sans Souci – AKA Plastique – will make her way to The Flash this season. The series’ incarnation of the metahuman is a fetching young redhead who was a bomb specialist with the Army before she was injured by an IED in Iraq. Since being exposed to the Central City explosion, she can turn any object into a bomb with just a touch of her hand – not a bad comrade for The Flash to have on his team, eh?

Question: Any word on this year’s Aushole bash at San Diego Comic-Con? Is there going to be one? When are you giving out the tickets? I want to go so badly! —Cari
Ausiello: Unfortunately, we had to scrap the party this year for reasons both logistical and otherwise, and no one’s more bummed about it that your host. But I assure you, my annual booze-and-swag fest will resume in 2015. In the meantime, if you find yourself in desperate need of an Aus fix, I touch down in San Diego tonight around 8 pm PST, and I’ll probably be at Baggage Claim 1 around 8:15. Shortly thereafter I’ll be on the taxi line. That should put me into the Gaslamp district at around 9 pm. At around 10:15 I’ll be standing in front of the convention center giving out free hugs as well as flyers with my Thursday, Friday and Saturday itineraries. Oh, and I’m wearing a blue-and-white gingham shirt.