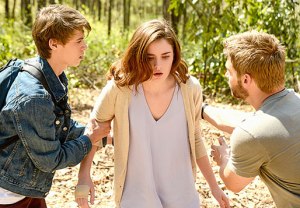 “This is a chance to find an answer. To find one damn answer.”

On Monday’s episode of Under the Dome, Joe seemed just as desperate for answers as many of us have been this season.

And although the CBS drama still has quite a bit of explaining to do, a few of the show’s puzzle pieces are making like pink stars and falling into place.

PIGGING OUT | At the start of the hour, Big Jim and Rebecca are still planning to control Chester’s Mill’s population, using the census information they gathered. But it seems Rebecca is about 10 steps ahead when it comes to how, exactly, the town’s residents will start dropping like flies. The “solution” comes in the form of a virus, which has laid dormant for years but is starting to spread in a number of sick pigs at the local farm. Rebecca — who has apparently been tracking every crop, animal and electromagnetic pattern in town since the moment the dome came down — takes to the school laboratory, where she’s been cultivating the virus in eggs. Once released, she tells a reluctant Big Jim, the strain could easily infect a quarter of the population. Oh, and she wants Big Jim to decide who stays and who goes in this Extremely Messed-Up Game of Life. No sweat, right?

Fortunately, the Tin Man does have a heart, and Big Jim can’t bring himself to distribute the virus via Sweetbriar Rose’s water supply. For a few horrifying seconds, it seems Rebecca is about to unleash the virus in her church’s holy water, but she, too, has a rare moment of clarity and keeps the virus sealed. (And let’s just take a moment to reflect on that: Rebecca was attending a weekly church support group and almost unleashed a deadly virus in holy water. Looks like she just upgraded to the deluxe suite in Hell.)

UNHAPPY MEMORIES | Elsewhere, Joe, Norrie and Melanie enlist Barbie’s help in uncovering who/what Melanie really is. An old newspaper clipping reveals that Melanie Cross went missing in 1988, and Melanie has a sudden memory of pink stars, which she used to eagerly await falling in the woods behind her house (aka the site of the mini-dome, which Joe, Norrie, et al found last season). Upon revisiting that exact spot, Melanie’s memory is jogged: She was indeed alive in ’88 — in fact, her friends included Lyle Chumley, Pauline and then-boyfriend Sam Verdreaux — and when the four of them stumbled upon an egg shimmering with pink stars, she was kicked into a ditch for wanting to protect it. Sure enough, Barbie digs up Melanie’s old necklace in the precise spot where she was killed. Poor girl is going to need some serious therapy when this is all over.

DO YOU SEE WHAT I SEE? | As promised, Junior returns to the town jail to release Lyle and get answers about his mom’s “death” in return. Lyle shows Junior a number of postcards that Pauline has sent him over the last nine years, each one hand-painted with a prophetic image of recent events in Chester’s Mill. The two trek to Sam’s cabin, where Pauline’s old journal contains similar visions, but Lyle KOs Junior and runs off with the journal before we can (sigh) learn anything more.

At episode’s end, Sam and Julia return home, and Sam goes in for an extremely awkward kiss after Julia denies Barbie an opportunity to clear the air. Julia is game to wave it off, saying, “Let’s not make this weird” — but things get just that when we see that Sam is hiding scratch marks on his shoulder — perhaps from the hand of Angie, moments before she was killed?

A few parting questions: If Pauline isn’t actually dead, why does Big Jim insist she took her own life years ago? Did he find her “body” and arrange the “funeral”? Didn’t the metal vial containing Rebecca’s virus look just like the memory erasers in Men in Black? And why is Phil still acting important? Sound off in the comments!