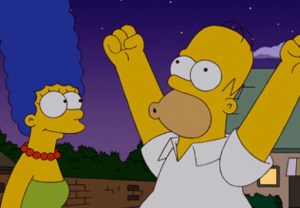 In addition to learning about Fargo Season 2 and the (shortened) Season 5 renewal of Louie, reporters at the Television Critics Assoc. summer press tour were also treated to a walk-through of SimpsonsWorld.com — a massive fan-catered hub being launched in October, in conjunction with FXX’s acquisition of the series’ complete library.

Additional features not previously mentioned include “new ways to explore Springfield’s characters and locations, the ability for users to curate their own personalized playlists and share their favorite show clips and quotes.”

“I don’t want to overpromise,” began Simpsons executive producer Al Jean, who joined Landgraf for the presentation, “but I think this app will supply you with affordable healthcare.”

(Basically, be prepared to watch enough Simpsons episodes and clips to make your eyes bleed — and, of course, to share with friends to make their eyes bleed, too.)

More of today’s FX announcements/reminders include… * It’s Always Sunny in Philadelphia‘s 10th season has been pushed to January 2015. (Tracy Morgan’s untitled new sitcom was to bow then also, but is on hold as the actor recuperates from his recent car accident.)

* This fall’s American Horror Story: Freak Show, Landgraf said, is populated by some “very strange” characters and lands “halfway between” Asylum and Coven in tone — less “brooding” than the former, not as campy as the latter.

* Sons of Anarchy creator Kurt Sutter’s The Bastard Executioner pilot, set in the early 14th century, will be filmed in England.

* Given the current conflict in Israel, production on Tyrant has moved to Turkey.