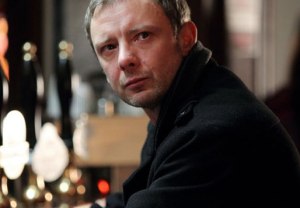 What if dying didn’t have to be the end? What if you could return — but in someone else’s body?

That’s what BBC America’s newest drama, Intruders, is looking to explore when it debuts on Aug. 23rd at 10/9c — following the premiere of Doctor Who.

Based on Michael Marshall Smith’s novel of the same name and produced by Glenn Morgan (The X-Files), the series focuses on a secret society devoted to pursuing immortality by seeking refuge in the bodies of others. “Welcome back,” greets the trailer. “You’ve been missed.”

Intruders stars John Simms (Doctor Who, Life on Mars) as Jack Whelan, a troubled ex-cop who must confront his past when his wife Amy (Mira Sorvino) goes missing. The show hints at a greater conspiracy with an assassin looking to cover up his crimes (Grimm‘s James Frain) and a ten-year-old girl on the run (Millie Bobby Brown, Once Upon a Time in Wonderland). Tory Kittles (True Detective) also stars.

Watch the trailer  below and drop a comment telling us if you’ll be tuning in!