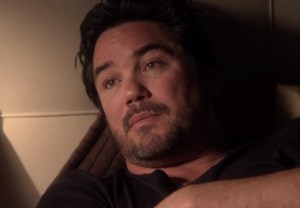 Sloane thinks she’s about to serve Pete some tough love in this exclusive sneak peek at tonight’s Hit the Floor (9/8c) — so imagine her surprise when her hungover ex counters with some hard truths of his own.

You’ll recall that last week, the VH1 drama ended with Ahsha unable to rouse her drunken dad from the aftermath of his latest bender.

In the clip, mama Sloane takes the bleary-eyed coach to task for the shambles his life has become, but she’s brought up short when he abruptly decides to get real.

“You wanna know what’s screwing with my head?” he asks. “You.”

Press PLAY on the video below to find out how the former Devil Girl handles that bombshell.