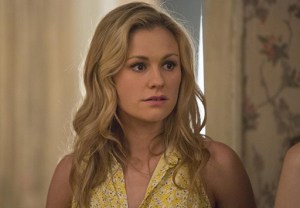 Eric’s Hep-V may have progressed to Stage 2, but after Sunday’s True Blood, at least we know he won’t be dying alone.

The episode’s final moments revealed that Bill Compton — sweet, Confederate, flower-bearing Bill Compton — has also contracted the virus, and he seems just as shocked as anyone. (Hasn’t he been on a strict Sookie diet all season? Could she have it, too?)

This revelation is especially heartbreaking because, prior to Bill’s gruesome discovery, viewers were treated to some quality Bill-Sookie moments — like, Season 1-level emotional moments. When Sookie thanked Bill for “seeing me the way I can’t see myself sometimes,” and those classic Bill-Sookie strings started playing, you couldn’t help but feel nostalgic for the good ol’ days.

Now, let’s see what the rest of our friends were up to this week… PARTY CRASHERS | Eric and Pam’s hunt for Sarah Newlin brought them to a swanky “Republic–t” fundraiser in Dallas, where they hoped to pump Sarah’s parents for their daughter’s whereabouts — but they got a lot more than they bargained for when both Sarah and the Yakuza decided to crash the party. In the chaos of the onslaught, Sarah managed to escape, but not before watching Eric annihilate a member of the Yakuza by literally ripping off his jaw. (Sorry, Governor Burrell, but your best-death-yet just got totally upstaged.)

BUSTED! | When a girlfriend has to remind her boyfriend that she “just found you f—ing a man in our car,” it’s never a great sign for the relationship. I’m talking, of course, about Jessica and James, the latter of whom finally gave into his feelings for Lafayette, then did him dirty in the back of his and Jessica’s truck during Sookie’s party. Even though we knew this was coming, am I the only one who felt gross about the way it ultimately unfolded? I would have been OK with a single confusing kiss, rather than a full-blown porking session; I guess we’re not wasting any time in the final season.

REBOUND REUNION | As much as I’m opposed to the way things went down between James and Lafayette — I would have preferred a classier venue than the backseat of a trick — I’m totally not opposed to this week’s Jessica-Jason development. After accepting that her boyfriend deserves to be happy without her, Jessica dropped trou and hopped aboard the Stackhouse Express for one last ride. Unfortunately, Queen Crazy Pants (aka Violet) overheard the exes reuniting from the other side of the door, and the look in her eye had me terrified. (Run, Jessica! You in danger, girl!) WEDDING BELLS | Just as Lauren Bowles teased to TVLine last week, Andy hunkered down on one knee and asked Holly to his bride this week. Despite the questionable timing — did Sookie really need all that happiness rubbed in her face just hours after losing Alcide? — it’s nice to see someone on this show actually getting a happy ending. I was starting to think those didn’t exist anymore. (It was also nice of Jason to give Adilyn and Wade a heads up: “I don’t know if you two are f—ing, but if you are, you’d better cut it out.”)

* Sadly, Ginger’s decades-long dream of sleeping with Eric will probably never come to fruition. That said, I laughed loudly at their (potentially) final exchange: “I’m diseased.” / “So the f—k am I!”

* Did anyone else think Lettie Mae was going to accidentally stab someone we actually care about? And, you know, not a vampire?

* Well, it took seven seasons, but someone finally told the people of Bon Temps how truly insane they are. (Thanks, Nicole.)

Truebies, it’s time to sound off on this week’s episode: Are you thrilled about the Jason-Jessica reunion? Do you think Bill is really going to die? Drop a comment with your thoughts below.