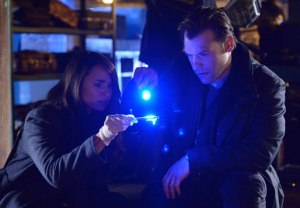 Remember the good ol’ days of TV dinners? The comforting concept that you could watch your favorite primetime shows while chowing down?

Well, The Strain is taking those good ol’ days and laughing in their face.

Indeed, Sunday’s installment of the FX thriller turned the “Ugh!” factor up to 11, while also introducing new questions — and some answers — to the case of New York City’s deadly virus.

JAILHOUSE ROCKED | While Abraham Setrakian awaits his fate in jail, he’s paid a visit by just about the last person he’d ever want to catch up with: the seemingly immortal Thomas Eichorst, posing as Abraham’s lawyer. The two engage in a tense chat — for starters, Eichorst refers to Abraham simply as “Jew” — and it seems that they have quite a bit of history, dating back to the last time this virus wreaked havoc. Abraham promises to avenge a young woman who was killed during the virus’ last go-round — it’s her heart that’s still sitting in a jar in Abraham’s basement, by the way — and reminds Eichorst that he once decimated his associate years ago, and will soon do the same to Eichorst. The creepy boss doesn’t take too kindly to this, but assures Abraham they’ll meet again soon: “Until next time, A230385.” (Which is very Les Miserables of him.)

LOST AND FOUND | On Manhattan’s Lower East Side, the Stoneheart Group’s gofer Gus has managed to get the massive coffin across the river. He hauls the goods to an abandoned warehouse, but upon seeing the coffin rattle on its own, promptly makes a break for it before Eldritch Palmer can arrive. Apparently, Gus could give Forrest Gump a literal run for his money: He makes it all the way to his mother’s apartment in Harlem, where he’s none too pleased that brother Crispin is swiping antiques downtown and bringing the stolen goods home to his mom.

Later, Mr. Palmer pays a visit to the warehouse, where the coffin has since been unloaded and opened. And although he was recently persuaded by his security guard to undergo a liver transplant, it seems Palmer has a different plan to reverse his declining health: a deal with The Master. Sure enough, Eichorst appears before Palmer and passes this chilling sentence: “You are very fortunate, Mr. Palmer. He has chosen you to bear witness to his glory.” And although Palmer’s expression seems to say, “Uh, I’m good, but thanks!” it’s not long before The Master appears before both men, and he’s none too happy with his presence in “the new world.”

RELATED  Are You Wedded to FX’s Married?

RAT’S OUTTA THE BAG | In Brooklyn, we catch up with Vasiliy Fet, a member of New York City’s pest control team who is hell-bent on finding rats where they don’t belong. He busts into the kitchen of a Manhattan restaurant and, despite the head chef’s protests, inspects the area until he finds a dead rat in a nearby cabinet. Jackpot! The restaurant is promptly shut down, the customers clear out and I don’t know about you, but I’m curious to see how Vasiliy will play a role in the eventual vampire hunt.

I WILL SURVIVE | Of course, the real dilemma at the heart of Sunday’s Strain is the four survivors from Regis Flight 753, who are released from quarantine under the authority of CDC Director Barnes, who is game to chalk the whole thing up to an aircraft system failure. Ephraim is indignant about the city-wide skepticism, and his temper gets him temporarily taken off the case (leaving plenty of time for things like AA meetings and custody hearings — y’know, the usual.)

Before too long, the survivors start to feel seriously weird. Their hair falls out, their gums bleed and they feel the urge to do some blood-sucking themselves. (Case in point: Rock star Gabriel gets a bit bitey in the middle of a hook-up with some groupies, then proceeds to lap up their blood long after they flee the scene.) When the pilot of Flight 753 is hospitalized with similarly freaky symptoms, a UV light shows he’s got multiple infected worms crawling just underneath his skin. (And now, my skin is crawling.) The ordeal prompts Ephraim and Nora to head to the morgue in search of Dr. Bennett — who, you may remember, kept Flight 753’s undead passengers very well-fed in the series premiere — but their field trip only reveals 206 suspiciously empty body bags.

Later — in a final scene that’s certainly not for the faint of heart — Gary Arnot gives his half-alive daughter Emma a bath. Poor guy, he just wants to cook dinner for his kid and listen to The Lion King soundtrack with her! But that happy ending isn’t meant to be: Just before he gets Emma out of the tub, she violently latches onto his neck with a super-long, claw-like tongue and drains the life out of him within seconds. Circle of life, huh?

Now, it’s your turn. What did you think of the episode? Did you watch the final scene through your fingers? Is anyone else as confused by Ephraim and Nora’s relationship as I am? Hit the comments!