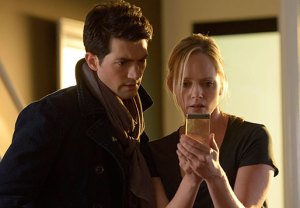 Children are the future. So what happens when there are only a few of them left and everyone on Earth is infertile and childless? That’s what Lifetimes’s The Lottery (which premiered Sunday night) hopes to explore.

If the premise sounds vaguely familiar, that’s because the series’ creator is none other than Timothy J. Sexton, the man who co-wrote Children of Men, a dystopic science-fiction film that investigated the same idea – only The Lottery is set a few years earlier, in 2025.

The pilot introduces us to Dr. Alison Lennon (Marley Shelton, Eleventh Hour), a scientist researching the cure for infertility, who successfully inseminates 100 embryos. But that’s not all that happens in the show’s first hour.

SECRETS & FERTI-LIES | Alison rushes into her lab to check on her research, where her colleague James declares, “Behold the first viable human embryo in six years!” (Clearly, he’s hiding a secret life as a magician.) Not long after, one of the President’s advisers, Darius Hayes (Rogue‘s Martin Donovan), shows up and informs her that she’s no longer in charge of the project she spent years researching and developing — because the government is in charge now. She doesn’t take the loss of her study well, telling James she’s going to look into what made the donors so special, but that’s when he tells her he’s staying on with the project. He also calls out Alison for using confidential sperm donor lists to look for sexual partners — which explains her random tryst in the first part of the episode. (It’s nice to know ethics are also extinct in the future.) That’s when Alison whips out the best comeback ever, “Don’t break your arm patting yourself on the back.” (Bookmark and save.)

ELVIS HAS LEFT THE SCHOOL BUILDING | Kyle Walker (Michael Graziadei, Grimm) drops his son Elvis (AKA the World’s Cutest Six-Year-Old) off at school. As the boy goes through the metal detector and x-ray machine, Kyle tells him he has to work late and they whistle what sounds like the Hunger Game mockingjay call. (Has Frozen 5 not come out yet?) Before he leaves, Kyle has a word with The Real Housewives of Pittsburgh some of the other moms and he tells them Elvis doesn’t need them to “comb” his hair. At this point it’s unclear who these ladies are more interested in, Kyle or Elvis.

Hours later, when Kyle “clocks out” of his job as a sperm donor — the kind that makes house calls — he finds that Elvis called and left him messages. Panicking, he rushes to his son’s school, only to find two agents from the Department of Humanity waiting to talk to him, as well as one of the moms from earlier. (Where is her kid? Why she is she obsessing over Elvis instead?) Turns out, Elvis has the flu and has been taken to the hospital — but that’s not the problem here. The agents question Kyle under the guise of “updating” his file, bringing up his previous drinking problems and Elvis’ addict mother who abandoned them. As the questioning continues it becomes clear that Kyle might not get his son back — especially when one of the agents misreads Elvis’ fears to mean he’s depressed.

AN EGG-CELLENT IDEA | Hayes calls a meeting with the President, Secretary of State Vanessa Keller (Athena Karkanis, Low Winter Sun) and her deputy Deathlok Nathan Mitchell (J. August Richards, Agents of S.H.I.E.L.D), and tells them about the fertilized embryos, suggesting they test them in military hospitals before implanting them in soldiers. Vanessa argues for the opposite. Inspired by the conversation she had with her grifter brother earlier in the episode, she tells the President that telling the American people will give them something to hope for — he even calls it “One giant leap for mankind.” When the President asks her what her plan is, she suggests a lottery. After the meeting, Hayes calls her out for lying to the President and accuses her of thinking about her eventual run for the White House. (So, has Beyonce already run?!)

THE WOMAN WHO KNEW TOO MUCH | One way or another, Alison is still looking into her project. First she convinces the receptionist of the egg donor clinic to give her one of the names of the donors, which she then uses to contact the woman, Brooke, and tell her about the embryo. When Brooke insists the child is hers, Alison goes over to James’ apartment where she first “seeks” his help, then distracts him while stealing his ID, which she uses to break into her old lab and steal the aforementioned embryo.

As Alison is making her getaway, Vanessa pulls up asking her to accompany her to Washington, but the not-so-good doctor declines, in her hurry to get to Brooke. And it’s good thing she’s in a rush because Darius has a man trailing her. After too many close calls, she’s able to lose him on a train. Alas, when Alison shows up at Brooke’s house, they’re wheeling her dead body way. Spooked, she rushes home, where James shows up (through her unlocked back door) and yells at her for stealing the embryo, before handing her the information about that egg’s sperm donor. It’s (you guessed it) Kyle!

RAISING HOPES | The President announces the lottery on live television, waxing lyrical about hope and what this means for the people of America. Lucky for Kyle this proves to be the perfect distraction, allowing him to somehow get past the receptionist (who straight up tells him he’s not authorized to see his son) and a bunch of distracted doctors. (Granted, he does have to knock one out.) But after using their special whistle, he tracks down his son’s room and soon enough, the cute as a button Elvis is back in his father’s arms. After promising to never let him get taken away from him again, Kyle whips out Elvis’ favorite costume mask and whisks his son away into the night — though it’s unclear how far they’ll get now that their faces are being broadcast all over the news.

The Lottery‘s dialogue and reasoning leave something to be desired. (Why is Alison suddenly taken off her project? Who says “behold” any more?) But the show’s premise is just intriguing enough to warrant returning for a second episode.

But what’s your take? Grade The Lottery via the poll below, then hit the comments to back up your choice.