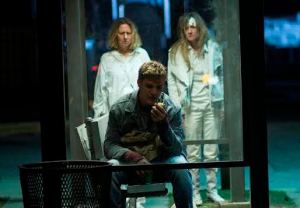 First it was 2 percent of the population. Then it was Garvey’s bagel. And now Baby Jesus has gone missing on The Leftovers. Well, not the Baby Jesus but the doll used in Mapleton’s Nativity scene. And that isn’t even the worst thing that happens as the beleaguered suburb celebrates Christmas in (what for us is) July. Pop a Prozac and read on. I’ll tell you all about it.

LAST-MINUTE SHOPPING | After Jill argues that just buying a new Baby Jesus is “cheating” and Mayor Lucy orders Garvey to do exactly that, he’s so annoyed that he makes it his mission to track down the sacred toy. Since he suspects his daughter, aka the only teenager sulkier than Bella Swan, he immediately questions her pals, the Frost twins, who of course lie through their identical teeth. But the chief’s instincts are absolutely correct: In fact, that very night, one of Jill’s classmates fits Baby Jesus with a Roman helmet (do yourself a favor and don’t look up what that means!) and then Jill herself takes aim at it with a flaming Nerf arrow in order to give it a Viking funeral. When push comes to shove, however, she can’t fire. (Okay, so maybe she’s not all bad.) Later, Baby Jesus is left on Garvey’s doorstep, and we think, “Yeah! Finally! A win for the chief!” Only, by the time he gets around to returning B.J. to its crib — d’oh! — Reverend Matt has already replaced it with a spare.

THE NIGHTMARE BEFORE CHRISTMAS | Meanwhile, Tom is having the crappiest holiday since Silent Night, Deadly Night. First ditzy Christine is attacked at a hospital by a pantsless nutso who claims, “I know what’s inside you” (Holy Wayne’s progeny, it turns out), then Tom has to beat a hasty retreat because the mother-to-be’s doctor thinks he’s the one who left her black and blue. And just when it appears that Tom’s day can’t possibly get any more sucktacular, he’s approached by the Guilty Remnant with a pamphlet whose cover reads, “Everything That Matters About You Is Inside” — and whose inside is empty. (Bitches, kicking a guy when he’s down!) At his wit’s end, Tom asks for a sign from Holy Wayne that he shouldn’t give up and go home. And at that very moment, his phone rings: It’s one of those prerecorded telemarketing calls, this one offering a way for Leftovers to feel like they’ve achieved closure with the departed. For some reason, this is sign enough for Tom, so he retrieves Christine from her hospital bed, and off they go again. But wait, there’s more. (Does this show ever let up?) When Tom wakes from a nap on their bus out of Dodge, Christine is flirting with a soldier, also named Tom. And next thing ya know, the bus has happened upon a highway full of Loved Ones — so far as I could tell, dummies that the bereaved bury in place of their vanished relatives. This somehow plays into dreams that Christine has been having and in time will somehow make sense. Somehow. Maybe?

CHRISTMAS EVIL | In case you thought that a pointless search for a kidnapped Baby Jesus was going to be the only indignity heaped upon Garvey in “B.J. and the A.C.” (and are we to assume that the A.C. is the Antichrist? Christine’s baby? One and the same?), he’s also paid a visit by Laurie and Meg. Since Laurie has sworn off talking, Meg reads Garvey a letter from his wife in which she thanks him for loving Tom like his own son (even though Tom is her ex’s) and for trying to fix what was broken in her. Unfortunately, “I think,” Meg says for Laurie, “I’m supposed to stay broken.” That being the case, the ominous envelope the women have brought contains divorce papers. Furious, Garvey is shouting at Laurie — “You want this over, you [bleeping] say it!” — when Jill comes home. And man, is there ever some ache in this moment. Jill quietly reaches under the Christmas tree and pulls out a present for her mom — a lighter (the perfect gift for a member of the GR, after all) inscribed with a heartbreaking message: “Don’t forget me.” All this, and we’re still not done piling it on poor Garvey. While he’s arresting the GR members who turn up in typically ominous fashion at Mapleton’s Christmas dance, the rest of them — including Laurie and Meg — are Grinchily breaking into people’s homes and removing from picture frames any photos they might have of the Departed. Excuse me, but that is some cold s— right there.

Okay, your turn. What did you think of the episode? And how relieved were you to see, especially amid all this darkness, Garvey and Nora enjoying at least a moment of levity at the dance? Hit the comments!