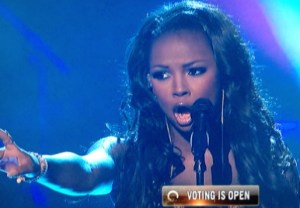 An almost unbeatable favorite emerged Sunday night in the battle for Rising Star‘s Season 1 crown, and, so, please kindly put your hands together for “None of the Above.”

RELATED Quotes of the Week from The Fosters, Masters of Sex, Wendy Williams, Pretty Little Liars, Defiance and More!

For those of you who slept through more than half of this week’s telecast, it bears pointing out that I’m not talking about the sculpted identical triplet brothers who threatened to take off their shirts for Kesha in the audition rounds — even though “None of the Above” would actually be an excellent name for their act going forward.

Rather, I refer to the thudding realization that after five weeks of competition, there’s really not a single contestant on ABC much-hyped, low-rated singing competition who’s worthy of a major-label recording contract. Heck, judges Brad Paisley, Ludacris and Kesha, along with host Josh Groban, might be doing irreparable harm to their own future music sales by continuing to walk around with the pungent smear of Rising Star on the bottoms of their shoes.

I’m not even exaggerating here! Two of the three vocalists advancing by the grace of east-coast viewers — those closer to the Pacific will save one of a trio of booted wannabes in a few hours — sat somewhere between “the third-best person at your office karaoke party (after four pinot noirs)” and “Sweet Jesus, I would actually hurl a tomato at this person if I was in the studio audience.”

With that said, let’s break down tonight’s duels”

Gabrielle Nicole, “River Deep Mountain High” — Grade: C+
vs
Macy Kate, “Demons” — Grade: D
Macy Kate advances with 80% (including all three judges) over Gabrielle Nicole’s 49% (including all three judges). See what bragging to America after your audition can do to your voting tallies, Gabrielle! To be fair, Ms. Nicole struggled to stay on pitch at the ends of phrases, and her energy was surprisingly desperate. But compared to Macy — with her nonexistant lower register and strident tone — she deserved the win, stank attitude and everything.

Sonnet Simmons, “Feeling Good” — Grade: C
vs
April Lockhart, “Animal” — Grade: D-
April advances with 76% (including all three judges) over Sonnet’s 73% (including all three judges). Sonnet stretched her upper register like a dime-store rubber-band spanning the Hudson — and the results weren’t pretty. But I’ve heard nicer sounds coming from my dentist’s bag of tools than from April’s mouth tonight. I’m guessing Sonnet — by virtue of landing a handful of phrases with aplomb — will get the save.

Austin French, “I Don’t Want to Be” — Grade: C
vs
Adam Jaymes, “Free Fallin'” — Grade: C-
Austin advances with 81% (including all three judges) over Adam’s 53% (including Kesha and Brad). I’m still not sure what was worse: Austin’s insipid delivery and irksome “R&B” runs or Adam’s off-key warbling and whispered earnestness. Oh wait, I actually don’t care. (Sorry.)

What did you think of tonight’s Rising Star? Who were your faves? Did anyone get robbed? Does anyone deserve to “win”? Take our polls below, then share your thoughts in the comments.