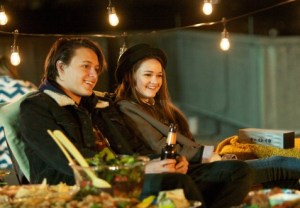 Fox’s upcoming drama Red Band Society — which takes place in the children’s wing of a hospital — is not assigning a ticking clock to each of its patients.

“Yes, there are serious things that these kids are going to have to face. But it’s not a show that has a body count,” executive producer Margaret Nagle promised Sunday at the Television Critics Assoc. summer press tour in Beverly Hills.

“Eighty-five percent of all kids that go to the hospital with any of the diseases in this situation recover,” said Nagle, whose spent much of her childhood in pediatric hospitals due to her brother being in a coma. “It’s really about that time that you spend in the hospital and how you learn…when you’re old enough to do something about it.”

Added star Octavia Spencer, who plays gruff but lovable Nurse Jackson: “I was surprised at how uplifting [the script] was.”

Nagle also argued that today’s youth, as evidenced by the success of The Fault in Our Stars and Chasing Life, “are not about the immortality of Twilight. There’s a switch, and it’s gone to mortality.”

Meanwhile, the tone of Red Band Society and its group of unlikely friends may evoke The Breakfast Club for some viewers. (There’s even an actor from the John Hughes classic who Nagle really wants to guest-star as a pathologist.)

“That [1985 film] is what I thought of when I read the script,” star Zoe Levin said, “because it’s so character-driven…. That’s the beauty of [the Red Band kids’] friendship, it’s so unlikely. It’s breaking down everyone’s walls and everyone’s barriers and how it’s so universal being a teenager. They happen to be in the hospital, but it’s not about that. It’s about their friendship.”

Moving forward, the drama will also look to a popular Netflix series and move beyond the white walls to reveal the characters’ backstories via flashbacks.

“When you’re in a set environment [like] Orange Is the New Black, you need to get out” and see how the patients and workers got there, Nagle said. For example, it will be revealed that Wilson Cruz’ Nurse Kenji Gomez-Rejon was the first patient of Spencer’s character.

“We’re going to go home with these adult characters, as well, and find out about their private lives,” the EP added.