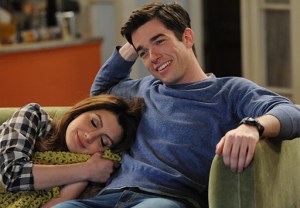 Fox’s “cynical-but-hopeful” comedy Mulaney has been on an interesting journey since its early days as an NBC pilot — but creator/executive producer/star John Mulaney is confident in the show’s future, largely because of the strength of its cast.

“The biggest revelation to me [during this process] was seeing the strength of the ensemble,” Mulaney told reporters Sunday during the Television Critics Association summer press tour, noting that we’ll really see the cast come together in Episode 6. “This is a very potent weapon.”

Executive producer/director Andy Ackerman also sang Mulaney‘s praises, going as far as to compare it to Seinfeld, which he directed and executive-produced.

“This is a cast that I’m really excited about,” Ackerman said. “I see so many similarities [with Seinfeld] in terms of the chemistry and the talent. … If we have a small percentage of the success Seinfeld had, I’ll be thrilled.”

It’s an ensemble that includes TV comedy veterans Martin Short and Elliott Gould, which Mulaney noted is “ridiculous.” When he originally wrote the pilot in his apartment, he described their characters as being a Martin Short-type and an Elliott Gould-type. “To actually get the actors themselves,” Mulaney said, “was incredible.”

(Side note: Gould will also be recurring on the second season of Showtime’s Ray Donovan, but said his “major focus” is Mulaney.)

One co-star who won’t be pulling double duty is Nasim Pedrad, who addressed her decision to leave Saturday Night Live in order to do Mulaney: “There’s nothing like [SNL], and I was lucky to be there for five years. At some point, you have to leave, and I can’t think of a better reason to leave than this particular show and this particular cast.”

But don’t expect Pedrad to find herself side-by-side with Kim Kardashian — her most popular SNL impression — on Celebrity You Guessed It, which is Mulaney‘s game show within a show. Still, Mulaney said there is one major celebrity guest fans can get excited about: TV’s own Superman, Dean Cain.

“I just set the world on fire,” Mulaney said.