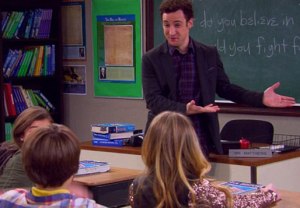 We’ve got questions, and you’ve (maybe) got answers! With another week of TV gone by, we’re lobbing queries left and right about shows including Girl Meets World, Mistresses, 24: Live Another Day, and Pretty Little Liars

1 | Does Girl Meets World‘s Cory ever teach any actual history in his class? On that note, do any of Riley’s classmates pay attention to Cory when he’s teaching? Also, wasn’t it great to see Topanga and Auggie’s dynamic?

2 | Since Salem’s Increase was always so quick to invite suspected witches to, ahem, hang with him for a spell, why was Tituba set free with her neck intact? And now that Mercy has crowned herself queen of the night, can we all agree that she is the coolest, battiest thing since Buffy the Vampire Slayer introduced Drusilla? And does anyone know what Mercy was talking about when she said she “beheaded the rose”? Also, how is anyone in that town fighting frizz? Magic?

3 | Which Mistresses bombshell made you gasp hardest: Daniel telling April that he’s (gulp) married? Karen discovering her former coworker/new bedmate Jacob just broke off a relationship with her suicidal prostitute patient? Or Zack inconveniently failing to deny to Dom that he, too, has feelings for Savi?

4 | The first time you caught a glimpse of the creature emerging from the plane’s cargo hold on The Strain, didn’t you think — just for a second, given only that rear view — “Hey, that’s Sweetums from The Muppet Show!”? And how distracting was Corey Stoll’s hair during Eph’s therapy session? 6 | For a show in which the judges have typically championed “authenticity” and “realness,” how come no one has called out Food Network Star‘s Lenny on his relentless, waaaayyy-over-the-top cowboy shtick?

7 | Wasn’t Switched at Birth‘s Bay a little too harsh when she told Daphne that the dying Angelo wasn’t her “real” father?

8 | Is there any way ABC’s will be able to resist the idea of The Bachelor: The Farmer Takes a Wife — starring the ridiculously handsome, charming Chris (AKA the one Andi inexplicably booted this week in favor of smarmy Nick)?

9 | Anyone else surprised that The Fosters‘ Callie initially thought her mid-coitus panic attack was because she was still in love with Brandon, not because she was raped?!

10 | Does Under the Dome‘s Rebecca have more than 24 hours in her day? How else did she manage to narrowly avoid death, hose the acid rain out of Chester’s Mill and get back to the diner to gloat, in just a few scenes?

11 | Which 24 death crushed you more: the one in Live Another Day‘s finale, or Renee’s? Also, might Cheng Zhi cross over to Sleepy Hollow this fall as a new Headless Horseman? 12 | Now that Pretty Little Liars‘ Travis is out of the way, how much longer will we have to wait for Caleb and Hanna to get back together? (Side note: Is there anyone who doesn’t love Caleb’s new look?) Also, what cell phone plan is “A” on?

13 | Since Chasing Life‘s Leo has been revealed to be terminal, can we use our Make-A-Wish to keep Scott Michael Foster on the show even if Leo dies? Perhaps as his twin brother Theo… ?

14 | Why isn’t Finding Carter‘s titular teen more conflicted about Lori? The woman lied to her for years and is capable of kidnapping (for reasons unknown to us and her)! And wasn’t Gabe’s talk of inevitably ending up with Carter a tad unsettling?

15 | Would VH1’s instantly addictive The Linda Perry Project work better as a half-hour program (AKA without 30 minutes worth of exhausting “What just happened”/”What’s coming up” footage)?

16 | Although Big Brother‘s Devin was easily the biggest bully in the house, did his fellow houseguests’ over-the-top celebration of his veto loss and eviction make you feel a little bad for him? drug dealer? Shouldn’t they be even now? And can we all agree: This ain’t your grandma’s Royal Pains?

18 | Is “Back-to-Back” the most entertaining new Hollywood Game Night addition in a long while? But were Johnny Weir’s short-shorts flirting with a TV-MA rating?

19 | Wouldn’t Dominion‘s Whele be a better villain if Anthony Head didn’t have to focus on his American accent so much?

20 | Could Welcome to Sweden be named Meet the Föckers?

21 | Was Gale Harold’s Defiance character among the last you expected to ever see again, no matter the means? Oh, and what exactly does Irathient breath smell like?

22 | How horrifying is this (not terribly accurate) Wendy Williams cake going to look with a dozen or so slices cut out, discarded in the dumpster in the alley behind her studio?

23 | As much as we still love the dollar-bill-on-a-fishing-line bit, when will State Farm come up with a new ad campaign? (But don’t get us wrong, anything is better than the dish service marionettes and cell phone Framily Plan!)