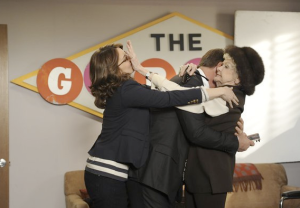 Elaine Stritch, a Broadway legend who won three Primetime Emmy Awards in the latter part of her career, died this morning at the age of 89, according to Entertainment Tonight.

While the actress and singer made her name on the Great White Way — scoring five Tony nominations from 1955 to 2001, including a win for her one-woman show Elaine Stritch at Liberty — TV fans might best remember her as Colleen Donaghy, irascible mother of Alec Baldwin’s network chief Jack on 30 Rock.

Stritch scored five Emmy nominations as Guest Actress in a Comedy Series for the 30 Rock role, and took home the statuette in 2007. She was nominated three other times in her career — winning Outstanding Guest Actress in a Drama Series for Law & Order in 1993 and Outstanding Individual Performance in a Variety or Music Program for the televised version of Elaine Stritch at Liberty in 2004. (Her other nod came in 1991, for Outstanding Supporting Actress in a Miniseries or a Special in An Inconvenient Woman; she lost that year to Ruby Dee.)

Stritch also earned a BAFTA TV nomination in 1979 for “Best Light Entertainment Performance” for her role in the British sitcom Two’s Company.

Check out video below of Stritch killing it in her final episode as Colleen, and dishing her profanity-laden audition for a role in The Golden Girls (a monologue from At Liberty).