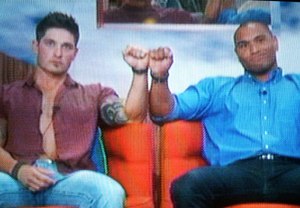 One would think, after 15 previous seasons of Big Brother, that this summer’s contestants would have known better than to form an eight-person alliance within the first week.

But I suppose that’s why they call it “wishful thinking.” Alas, the Bomb Squad was inevitably poised to blow up during Thursday’s live eviction episode, with alliance members Devin and Caleb sitting side-by-side on the chopping block.

But first — sorry, I had to — let’s break down how this week in the BB house unfolded.

THE WEEK SO FAR | Operation Backdoor Devin was in motion since even before Paola’s eviction, and Derrick and Nicole becoming HoH kept things running smoothly. Jocasta and Caleb were nominated on Derrick’s end, while Nicole put up Donny and Amber. Caleb’s lovesick obsession with Amber went from Original Flavor Creepy to Super, Super Creepy, and he openly admitted to throwing the Battle of the Block competition in order to save “his queen.” (Relatedly, is CBS’ Stalker looking to cast any newcomers this fall?)

In a Power of Veto challenge that was a liiiiittle too close for comfort, Donny bested Devin, all but ensuring that Devin would be sent packing by week’s end. Jocasta — who couldn’t compete for the POV at all, due to heat exhaustion — came off the block, Devin was named the replacement nominee and those of us watching at home marveled, “Is something in the Big Brother house actually going according to plan?!“

THE STRATEGY | “Not so fast!” say the Big Brother producers. In a slyly edited segment skewed in Devin’s favor, the houseguests weigh the pros and cons of sending Caleb packing instead. Their points are all extremely valid: Caleb isn’t adding much to anyone else’s game, and his tunnel vision for Amber could be detrimental in the long run. Perhaps it would be wiser to evict the so-called “Beast Mode Cowboy” and keep uber-target Devin in the house?

In the meantime, BB11 alum Jeff Schroeder pays a visit to Donny’s adorable family in Albemarle, N.C., where they discuss his kind heart, his potential to win the whole shebang and how much they hate his shorts. (And yet, no word on whether Jeff and fellow BB alum Jordan are getting married anytime soon? You disappoint me, Jeff. Even if you did have me making googly eyes at my TV screen the whole time.)

THE VOTES | In Devin’s defense, the guy gives a pretty solid speech before his fellow HGs vote, pointing out Caleb’s Final Two deal with Amber as incentive to stay in the house. Caleb, meanwhile, can’t even be bothered to button his shirt for the occasion, which is charming. Ultimately, though, all thoughts of evicting Caleb seemed to be fleeting: Devin is evicted unanimously (11-0!), and as soon as he’s out the door, his fellow houseguests are celebrating so hard that it’s tough not to feel a little bad for the dude. Only a little, though.

Of course, I don’t mean to add insult to injury when it comes to Devin’s eviction. After all, the guy does have a 2-year-old daughter at home who could have benefited hugely from Dad bringing home $500,000. But, as a longtime BB viewer (who can safely admit she’s too emotionally invested in this show), I find it hard to sympathize with those who play the game so aggressively. Devin wasn’t the good kind of BB schemer, like Dr. Will and Dan Gheesling before him. He played a sloppy social game, used his daughter as a convenient manipulation tool and, frankly, was a bit of a bully. I won’t be sad to see him go, but it’s unfortunate that he couldn’t bring home the bacon for his family.

TO BE CONTINUED | In the backyard for this week’s Head of Household competition, contestants are paired off and must work together to weave 12 eggs through a fence, into a basket at the other end. Pairs are as follows:

* Victoria and Christine
* Caleb and Nicole
* Brittany and Jocasta
* Amber and Zach (which must be making Caleb seethe — but at least it’s not Cody!)
* Donny and Hayden
* Cody and Frankie

The competition won’t be finished before episode’s end, but Cody and Frankie are tied with Amber and Zach for the lead when Julie checks in. Until Sunday, it seems! (Or, for those with the live feeds, until later!)

Were you as glad as I was to see Devin walking out the door? Which pair would you like to see become co-Heads of Household? And how much longer will Victoria wait to do anything noteworthy? Sound off in the comments!