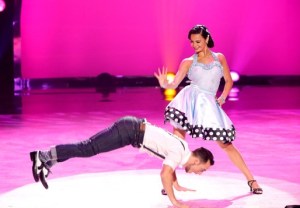 I know it’s early into Season 11, but I’m not sure So You Think You Can Dance‘s effervescent Rudy can do any wrong.

OK, maybe he should consider a 10 percent reduction in wide-eyed golly gee-ness when he gets positive feedback from the judges — it’s sometimes a fine line between wicked heartthrob and ventriloquist’s dummy — but you’ve got to admit he’s as loveable as a teacup chihuahua peeking out from a cashmere blanket (or a newborn kitten cradled in an endive leaf, if you’re not really into canines).

Tonight, Rudy scored some additional (and probably unneeded) personality points by admitting to a percolating crush on Jacque — a crush that the sultry ballerina apparently reciprocates. “She’s perfect,” he sighed in response to Emmy-nominated host Cat Deeley asking what drew him to Jacque, while tens of thousands of voters punched a chad (or 50) on his behalf.

Was it all a calculated ploy? It’s hard to say — though I’d like to think these young artistés aren’t quite so cynical. And yet, as Stanley (whose androgyny was called out by exquisite guest judge Misty Copeland) and Jourdan (whose pre-performance package focused on her weigh-lifting regimen) got booted at the end of the telecast, I wondered if Fox would’ve pushed this showmance story arc so aggressively — if at all — had Rudy developed feelings for one of his male competitors, or if Jacque had kissed a girl backstage (and liked it).

Oh c’mon — it’s not hard to imagine any same-sex pairings blooming stage left at SYTYCD. But the way “masculinity” continues to carry as high a premium as beluga caviar with head judge Nigel Lythgoe — and the way even occasional male-male or female-female routines never get described in a romantic way by choreographers — the sudden slow clap for Rudy and Jacque struck me as perhaps a little… unfair? Troubling? Worthy of at least a little hrrrmm?

Heck, even when you take questions of gay or straight or bi or questioning out of the equation, you’re still left with contestants like Marcquet and Jourdan — who got dinged by Nigel for “not personally connecting” with the audience. But isn’t personal connection a helluva lot easier when producers have painted you standing outside somebody’s bedroom window, boom box held over your head, Peter Gabriel at full blast?

I dunno exactly what point I’m trying to make. I’m not even 100 percent sure I’ve made the right decision by trying to make it in the midst of this recap. But it was the thought that got lodged in my head as I sat down to write — and so I figured I’d throw it out there for discussion. I mean, if Mary Murphy still gets to screech at top volume as she puts dancers on the Hot Tamale Train, should any bullet point really be relegated to the holster?

On that note, let’s hand out awards for the night’s 10 routines

DANCE OF THE NIGHT
Bridget Whitman and Emilio Dosal (Jive) | OK, I’m still genetically programmed to couch-dance every time “Happy” plays in my living room, but even so, Bridget and Emilio were so fleet-footed and flirty during their routine — and aided by such kicky costumes — that they decimated any bad mojo that might’ve been in or around me. As Misty noted, Bridget was “light and precise and beautiful,” while Emilio (while perhaps not quite as sharp) moved with such purposeful joy that I swear I’ll storm Fox HQ (at least in my head) if he’s in the Bottom 3 guys again next week.

CO-RUNNER-UP
Tanisha Belnap and Rudy Abreu (Broadway) | Rudy had a couple flail-y moments with his cane work — and his back bend was only half of Tanisha’s — but for the most part, the duo’s crazy-energetic piece set to “Sing Sing Sing” was one of the better Broadway numbers in recent SYTYCD history. As Mary noted, at the end of the season, this is one we’ll remember — not just for the synchronization and wicked footwork, but from the sheer transference of positive energy radiating from Tanisha and Rudy.

CO-RUNNER-UP
Emily James and Teddy Coffey (Contemporary) | Some of the chroreographed lifts in this lovers’ dance were indeed a bit “ugly,” as Nigel noted, but there was a connectedness and an emotional honesty running through the whole routine that made it downright magical. If I had to nitpick, I wish Emily had been a little more vibrant in her moments of stillness, but Teddy was so invested in every line and extension, I’d have believed it if you’d told me his specialty was secretly contemporary.

WORST OF THE NIGHT
Brooklyn Fullmer and Casey Askew (Jazz) | Wait, this Bonnie Story routine was supposed to be about a guy asking his crush out on a date? Because from my vantage point, this looked like two solos happening on one stage — by a pair who could barely be bothered to look at one another. Casey has some undeniable agility in his spins and leaps, but there’s something that strikes me as unformed in his movement. Brooklyn, meanwhile, never quite looked happy to be there — making her my No. 1 pick for next week’s ouster.

MOST OVERPRAISED
Carly Blaney and Serge Onik (Hip-Hop) | I absolutely loved this pair last week, but while Misty was right in noting how Carly truly embodied the skeleton character she was asked to play, Serge never managed to look like her equal throughout the hip-hop number. I mean, not only did the dude never truly drop it to the ground and get nasty, but his energy began to lag at the midway point. Maybe he was distracted by the heinous clear-plastic priest collar in his outfit? Maybe he was just too far outside his comfort zone? But my initial impression that he’s a serious contender for the Season 11 crown is now in question.

MOST SURPRISING
Valerie Rockey and Ricky Ubeda (Viennese Waltz) | Valerie’s never been the most graceful mover — but her sheer joy (and Disney princess dress) allowed her to capture the romantic spirit of Lacey Schwimmer’s choreography. Still, for my money (and despite what the judges said), Ricky was still the MVP — sure of foot, explosive with his strength and more limber than a ten-foot Twizzler.

PERFORMANCE I’LL HAVE FORGOTTEN BY TOMORROW
Jacque LeWarne and Zack Everhart (Hip-Hop) | Jacque seemed a little sluggish in her transitions, while Zack, so memorable last week, kind of faded into the background. I won’t be shocked if she’s at risk next week.

MOST DISAPPOINTING
Jessica Richens and Stanley Glover (Jazz) | I was struggling to figure out why this routine irked me so much — and then the mesmerizing Misty (who really ought to be a semi-permanent third judge) went and succinctly summed it up: Jessica and Stanley oversold it with their magic-carpet ride routine with facial expressions that were void of any genuine feeling. Let’s be honest: Jessica’s transcendent Week 1 dance with Ricky can only take her so far.

PERFORMANCE I’LL HAVE TO WATCH AGAIN (SINCE THE JUDGES SEEMED OVERLY HARSH)
Jourdan Epstein and Marcquet Hill | I loved the physical strength and slinky sensuality of Jourdan’s performance, but Nigel was right that Marcquet didn’t seem entirely sure-footed during his lifts.

And now… the Bottom 6, based on last week’s vote — and then narrowed down by the judges based on this week and last week’s performances:

Eliminated (the judges did not deviate from the two lowest vote-getters)
Jourdan
Stanley (anyone feel like a lot of untapped potential got wasted with this elimination?)

What did you think of the Top 18? Take our poll below to vote for your three favorite routines, then hit the comments with your thoughts on the performances, our amazing (repeat) guest judge and eliminations!