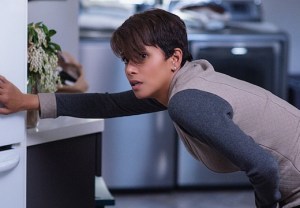 A public service announcement, courtesy of this week’s Extant: When you hear an ominous thudding throughout your home, it may be caused by some sneakers tumbling against the walls of the clothes dryer. Or? The alien who’s taken the form of your dead boyfriend might be waiting for you in the kitchen. #themoreyouknow

Sadly for Molly and her asymmetrical haircut of WTF-is-going-on-here, Faux-cus’ appearance in the breakfast nook is the least disturbing development that takes place in the episode. Mysterious symbols branding themselves on her abdomen? A concern-causing brain scan? Hints that John and Julie maybe are more than humanich-building buds? Yeah, we got that.

Read on as we review “Extinct.”

RELATED Save the Date! More than 50 July Premieres and Finales

HELLO AGAIN | It’s the morning after Fox Mulder Harmon Kryger appeared to Molly and told her to trust no one. When the aforementioned troublesome tennis shoes rouse Molls from her slumber, she happily makes breakfast and has a conversation with John that I’m sure is very important but — hold up a second: Eggs that can stand on their own?! O brave new world that has such breakfast foods in it!

Anyway, the Woods discuss their plans for the day – Ethan has a birthday party at the Museum of Natural History, then he’ll meet Yasumoto at John’s lab, and then Molly and John will share a romantic lunch. Ethan overhears his mom mention “looking sharp” and asks what the idiom means; Molly gestures to John as she replies, “This is looking sharp.” Preach, honey!

All is well until Molly hears the drumbeats again, doubles over in pain and sees Faux-cus telling her, “It’s OK.” (Side note: It’s still not OK.) She passes out and hits the ground, and when Ethan finds her, a pattern of interlinked circles is raising itself in the general area of her womb. I just knew the International Olympic Committee wasn’t as benign as it seemed!

The pattern fades, Molly comes to and later – after Ethan wanders off at the museum party and worries that John will be mad – they agree to keep each other’s secrets from Dad.

MOTHER LODE | But the number of things Molly is keeping from her man continue to pile up throughout the hour. First off, Harmon Kryger makes contact with her and confesses that he, too, saw dead people in space. As we watch in flashback, Kryger’s mom appears to him under similar circumstances to Molly’s (solar flare, computer shutdown) and can only repeat what he’s said to her/it. Kryger, crying, traps her in an airlock and flushes her into space.

But when Molly tries to access the footage of his mission, she’s locked out. She dislodges the chip that allows ISEA to track her, then hops in a car with Kryger, who whisks her away to the trailer where he now lives. Kryger says he told ISEA everything, and was branded as crazypants for his troubles. But Molly has sobering news for her sweaty, pasty former colleague: They both seem to be suffering from the same brain abnormalities… which she knows because she told Dr. Sam that Kryger’s not dead. (Side note: Molls, when Kryger told you not to trust anyone, what part of the sentence was unclear?)

Speaking of the good (or possibly nefarious-but-posing-as-a-pal) doc, she ushers Molly to a veterinary facility to give her an off-the-books ultrasound, which reveals that she’s got a 14-week-old, perfectly normal looking human bun baking in her oven. Still, Molly tells Sam, she can’t tell John yet. But she does make sure that Director Sparks knows that she’s expecting… and expecting him to cough up some answers about how it happened.

Sparks makes tracks to Yasumoto’s home, where the two men have yet another exchange that creates more questions than it answers. Sample dialogue:

YASUMOTO: “With Molly, there can be no doubt.”
SPARKS: “You think we found them?”
YASUMOTO: “I think they are already here.”

Want the scene to get weirder? Don’t worry; it does. Yasumoto references how “this all started with” Sparks’ daughter, and then we see that Femi Dodd – the board member who’s been causing trouble for John’s humanich project – is sleeping with her uber-powerful boss. Oh, and Yasumoto has a little box that tells him how much longer he has to live: 102 days.

RELATED CBS’ Fall Schedule Kicks Off With Thursday Night Football; Two and a Half Men, Elementary Premiere in Late October

NO ASTRONAUT IS AN ISLAND | Let’s back up a second and examine the relationship between John and his co-worker, Julie. When she buys him coffee and can’t hide her disappointment when he doesn’t take it, that odor I smell isn’t the aroma of freshly brewed beans: It’s the scent of her like-liking him. My hypothesis is backed up when Molly drops Ethan by John’s fancy new lab, and her conversation with Julie is so stilted, it might as well be hovering above the dance of the clowns at Cirque du Soleil.

If I’m right, then Julie would be happy to know that Molly stands John up for their lunch, creating even more distance between them when she finally comes home and can’t tell him why she blew him off. He understands she needs time, he tells her, but she has to remember that she’s not going it alone anymore. It’s the perfect time for her to confess all… but we’ve got 11 episodes left, people!