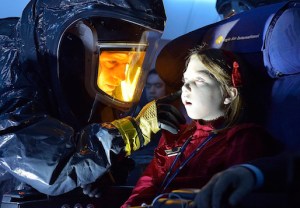 The Strain could prove contagious, giving FX’s its best series premiere numbers of the year-to-date.

The vampiric drama — which TVLine readers gave an average grade of “B+” — premiered on Sunday night to 3 million total viewers, up from both Tyrant‘s launch (2.1 mil) and Fargo‘s opener (2.7 mil).

RELATED FX’s The Strain: Will It Catch On?

Among Sunday’s other cable premieres, Showtime’s Ray Donovan returned to 1.2 million total viewers, down 14 percent from both its Season 1 premiere and that finale (which led out of the very final Dexter). Masters of Sex‘s own Season 2 opener retained 825K, down 17 percent from its launch and off 30 percent from its freshman finale.