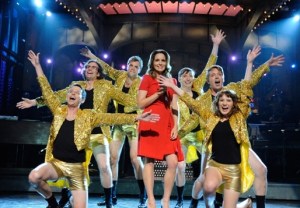 Heads are rolling like a Game of Thrones finale at Saturday Night Live this week.

Milhiser was mostly relegated to the background during his SNL tenure.

Wells got a strong start in the Season 39 premiere playing Lena Dunham’s Hannah Horvath in a spoof of HBO’s Girls, but failed to gain much traction thereafter alongside a strong roster of female reperatory players including Emmy nominated Kate McKinnon, plus Vanessa Bayer, Aidy Bryant and Cecily Strong.

Check out video below of Wells’ Girls moment, plus Wells and Milhiser flanking host Tina Fey during her opening monologue in the Season 39 premiere, then share your thoughts on their departures.
https://www.youtube.com/watch?v=yZwsozPPSqg