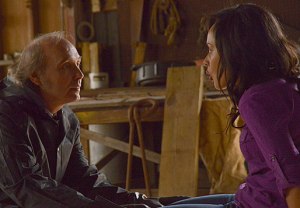 You know how a family dinner can get really awkward when the topic of religion comes up? That’s essentially what happens on Monday’s installment of Under the Dome, with much uglier repercussions than uncomfortable silence.

Here’s what went down this week in Chester’s Mill:

CLOSE SHAVE | In case you were hoping for another shady Chester’s Mill resident to make his appearance, you’re in luck! Town barber Lyle Chumley (played by actor-musician Dwight Yoakam) enters the fray and quickly butts heads with Rebecca about why the dome is causing trouble. Lyle turns to the Bible to make sense of what’s going on, firmly believing that recent incidents — including a downpour of acid rain that begins at the start of the episode — are plagues indicating the forthcoming Rapture. “There’s a new God in Chester’s Mill. And it’s going to show no mercy to infidels,” he says. Okay, buddy! Meanwhile, Rebecca is all about the scientific facts, which doesn’t go so well for her. Lyle kidnaps Rebecca and brings her to an old cement factory nearby, where he douses her with toxic rain until she admits the dome is testing Chester’s Mill. And while there may be some of us at home who are eagerly awaiting Rebecca’s demise, it’s not to be just yet: Barbie, Julia and Junior save Rebecca in time, giving her yet another opportunity to suggest population control. Will she ever give it a rest?

MIXED SIGNALS | Meanwhile, Norrie, Joe and Melanie head to the local high school to elaborate on a science project Rebecca once conducted in class to generate electricity. When the acid downpour keeps them trapped inside with Junior, they’re surprised to find a Wi-Fi signal that gives them a window, however brief, to the outside world. (Man, how many Facebook notifications must they have?) A strange website called HoundsOfDiana.com has tried reaching out to all of them, and Junior can’t resist opening an e-mail from the site, which leads him to — surprise! — a video from his mother, who’s looking very alive and very well, for someone who’s allegedly been dead for years. Pauline urges Junior to talk to Lyle for answers, but the signal is lost before her video message is finished. Later, the group traces the signal’s source to the locker where Angie was killed, though they find nothing inside.

Oh, and Norrie is totally not okay with Melanie hanging around and freakishly predicting the locker’s combination. She’s even less thrilled moments later, when the gang pulls out a 1988 yearbook from the high school and finds Melanie’s photo, where she looks exactly as she does in the present day. (Side note: I’ve always enjoyed Norrie, but after this episode, I have to say she’s probably my favorite character. Spunky, but not annoyingly so — quite the feat in Chester’s Mill.)

FAMILY MATTERS | While searching Lyle’s barbershop, Julia and Barbie find a photo of Pauline, Lyle and Sam Verdreaux, also from 1988 — back when Pauline and Lyle apparently were dating. And of course, there’s something toooootally fishy going on here. Sam visits Lyle in jail and says that whatever they buried 25 years ago was supposed to stay buried, but Lyle isn’t on the same page. Instead, he offers to tell Junior everything he knows about Pauline’s whereabouts, so long as Junior busts him out of his cell.

Some parting questions: Until Joe received that e-mail from his dad, had you totally forgotten his parents were alive outside the dome? Would it be socially acceptable to start a drinking game for every time a character says, “The dome is trying to protect us”? And most importantly, what did you think of the episode? Hit the comments with your thoughts.