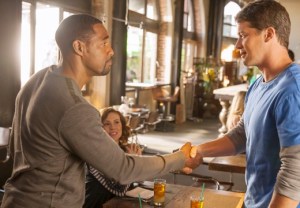 Fun fact: This week’s Mistresses is officially sponsored by the letters “O,” “M,” “F” and “G.” But don’t get it twisted: The letters in question should not be locked exclusively in the standard “Oh Em Eff Gee” formation.

“O,” for instance, also pertains to the “Big O” achieved by Karen and Jacob as they go from office mates to just plain mates (affectionately known as “popping open a tube of Pillsbury Croissant Rolls”).

“M,” of course, represents “mess” — Savi’s new and near-constant state of being — as well as the “marriage” which Daniel accidentally neglected to mention to April. [Insert your own gasp here as you once again process the duplicitiousness of The Lover Formerly Known as Sexy-Smoldering.]

“F” stands for the cup size of Dr. Scott’s breast-augmentation client, a lusty wench who doesn’t object to an examination from his salt-and-butter-coated hands in the middle of a movie theater. And finally, there’s “G” — which leads the acronym “GTFO” that I yell every time Zack opens his pie hole and drives Dom ever closer to Toni Taut and Tart.

And y’know what? I don’t even have a letter to express my feelings about Karen + Jacob + That Prostitute Patient of Karen’s and Her Jacked-Up Ringtone — but it can be summed up with the very exclamation point that popped up before every commercial break during “Why Do Fools Fall in Love?”

OMFG, OGMF, FOMG or however you want to jumble it, let’s recap the action from the hour, while raising key questions about each of our titular Mistresses.

SAVI | Dom catches an unsuspecting Savi in a lie about her new male friend Zack — and deservedly puts her on notice for being so cagey. When she finally explains that Zack is merely a guy who showed up at her open house and revealed himself to be the stranger with whom she’d had a serious car crash a year prior, Dom steals the words from my brain and is all, “AND YOU JUST LET HIM WALTZ INTO YOUR HOUSE?” (I know, riiiiight?) But Dom — who didn’t make partner at the firm for nothing — eventually cools off and suggests they all have lunch together. “Maybe we should all be friends?” he coos. Except, at the restaurant — where Zack has creepily ordered beverages for everyone — Dom goes into interrogation mode (“You either want money or you want Savi”) and Dom drops the bomb that maybe he does have feelings for our full-lipped attorney.

Things escalate quickly from here. When Savi can’t explain to Dom why she kept her relationship with Zack a secret, and can’t even verbalize what this stranger provided for her that Dom couldn’t, he calmly — and verrrry deeeeliberrrrately — sets some boundaries. “You need to figure that out. You need to take some time and think. Alone. And until you get it clear in your head, let’s call it a break.” As if her week couldn’t get worse, Zack shows up uninvited at her door (AGAIN) and acts as if she’s somewhat to blame for his romantic awakening, while Harry invites her out to drinks to say, “I’m moving to Australia. See ya!”

Key Questions | I’m firmly in Dom’s corner as far as demanding answers from Savi about her intentions with Zack, but how come these two haven’t discussed even once this season how she lost their baby in her car accident — and how that might be affecting her judgment all these months later? I’m of the mindset that if you love someone, you don’t set them free — you do some serious soul-searching about why they’re actin’ cray-cray, and then rationally confront them about it. Also, would Savi be justified in dialing 9-1-1 the next time Zack appears on her doorstep?

KAREN | We open the hour where last week’s episode ended — Karen bumping into Jacob outside her Hotel Bar of Debauchery and Secret Identities. He’s all, “Let’s do dinner.” She’s all, “Come over and I’ll cook.” And we’re all, “Is she going to boil a bunny or something?” The meal goes well — turns out our messed-up shrink took a class and is preparing a cookbook called Karen Makes Three Dishes — but after Jacob admits he lied to Karen, that he still has feelings for her, and then they kiss, he flees the scene, claiming the intimacy won’t feel right ’til he breaks up with his much-younger girlfriend. After a few days on hold, just as Karen begins to channel her worrying into housekeeping (another skill I never suspected she possessed), Jacob shows up and smooches her right at the door. Karen’s response — wrapping her legs around his waist and gently nudging the door shut with her foot — deserves an Emmy for Most Absurd Foreplay in a Drama Series. After recreating their favorite scenes from Masters of Sex — now with bonus male abdominal muscles! — Jacob heads to the shower, telling Karen to ignore his ex’s signature ringtone that’s popping up on his cell. Karen — who is a human being, after all — flips over the device and sees a photo of Anna (AKA Her Patient Who Works as an Escort). Oh, Karen: Just when we think she’s veering toward vanilla, somebody goes and dumps a gallon of pure-cane crazy over the top of her life’s sundae. #neverchange

Key Questions | Is Jacob harboring Richard Gere in Pretty Woman fantasies? Or was he legit dating Anna without realizing how, exactly, she was paying her tuition bill? Does he have an inside line on Karen’s barfly pasttimes? And is this all one long, elaborate con that’s going to end in a three-way?

APRIL | April dishes with Karen about her trust issues with Daniel — side note: Karen is literally never at work — and eventually invites herself to the Vermont country house she doesn’t believe he actually owns or regularly frequents. Eventually, Daniel (in his uniform of rich, short-sleeve Henley)  ‘fesses up that he’s been lying about his east-coast getaway. “Are there other women?” April demands to know, and in the season’s most gasp-inducing line, Daniel replies: “Just the one. She’s my wife.”

April convenes a meeting of the Mistresses Four — where Savi discounts infidelity as an option for her saintly pal and April cries it out. The next day, though, he stops by her shop, and she gives him one minute to explain himself. “I’m here to apologize,” he pleads. “For being married,” April huffs. “Apology not accepted!” (Upside of having had a husband fake his death and his other woman having tried to scam you for cash: You always have the best retorts in your holster.) “What we had was real and I love you. I think I may always love you,” Daniel says, undeterred, but tempted though she may be, April tells him his minute is up (paving the way for my favorite yet-to-be-greenlit sitcom, St. April, coming to ABC in 2019!) The episode ends, though, with a shocker: April returns to man who puts the “abs” in “absolutely fabulous,” and they embrace and shed a few tears.

Key Questions | Do we truly believe Daniel is married, or is there an even darker explanation for the mystery redhead? How is April going to juggle an illicit affair, single motherhood and small-business ownership along with all her friendships and whatever insane six-day-a-week workout regimen keeps her so impossibly beautiful? Discuss! JOSS | Harry helps Joss understand a brand-new emotion — jealousy! — that crops up every time one of Scott’s patients texts him a photo of her augmented breasts or asks for a quickie (examination) in the middle of their date nights. When he misses a dinner date and leaves Joss to eat Chips Ahoy and watch The Bachelorette — a damn fine way to spend a Monday, if you ask me! — she erupts like a petulant kid. And then Scott reveals he didn’t pick up his phone because he had a 22-year-old patient die during a routine rhinoplasty. Yikes! Joss makes matters worse by bolting while Scott is showering — but later goes and admits her insecurities and the depths of her feelings. Scott, who really is awfully adorbs, shoots back that he’s “100 percent, massively, actually annoyingly, in love” with Joss — and she hits a three-pointer (I think?) and agrees to move in with him. I mean, with Harry headed for Australia and all, it makes sense for her to not be playing the field, right?

Key Questions | I ask a variation on this query every week, but as Harry gave Joss romantic advice, did you detect a vibe that was A. Brotherly; B. Romantic; C. Both? And how cute was Joss telling a down-0n-himself Scott not to talk about her boyfriend that way? Jes Macallan = Dramedy Gold.

Your turn. What did you think of this week’s episode? Was Dom right to call a time-out on the relationship? How dark will the Jacob and Daniel storylines get? Hit the comments with your thoughts!