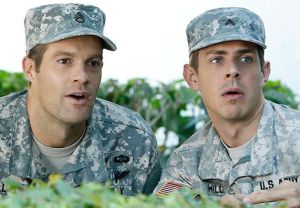 Let’s run this up the flagpole and see if anyone salutes: Enlisted may command a second season after all.

Per our sister site Deadline, 20th Century Fox Television, which produced the beloved yet one-and-done Fox comedy, is in “preliminary” talks with Yahoo to continue the Hill brothers’ adventures via the burgeoning Yahoo Screen platform.

Just two weeks ago, Yahoo Screen brokered a deal to give Community fans their sixth season.

Created by Kevin Biegel and starring Geoff Stults, Chris Lowell and Parker Young, Enlisted was cancelled by Fox in early March, along with fellow freshman Surviving Jack, Dads and Rake.