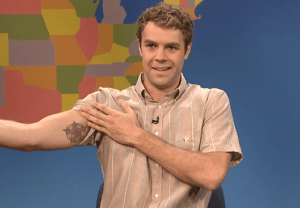 Saturday Night Live is shedding a little weight during its summer hiatus.

Brooks Wheelan, who joined the cast of NBC’s long-running sketch-comedy series last fall, announced on Twitter this evening that he’s been “fired” from the show.

Had a blast and loved every second of it. I'm totally honored to be able to make this next joke… FIRED FROM NEW YORK IT'S SATURDAY NIGHT!

Wheelan’s ouster does not come as a complete shocker, given his failure to introduce any particularly notable characters or recurring sketches in his limited time on screen.

You can check out one of Wheelan’s solo moments — an alcohol awareness PSA during “Weekend Update” — embedded below:

Surprised by Wheelan’s ouster? Saddened? Sound off below!