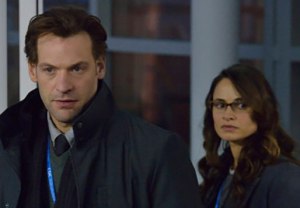 It’s time to forget everything you know about vampires.

Although the pop culture landscape is currently littered with blood-suckers — most of them very good-looking — the vampirism found in FX’s The Strain is entirely new (and way, way creepier).

But let’s not get ahead of ourselves. The thriller — produced by Guillermo del Toro (Pan’s Labyrinth), Carlton Cuse (Lost) and Chuck Hogan (The Town) — makes no mention of vampires, in its first hour at least, which debuted Sunday at 10/9c.

Rather, the series premiere centers on Dr. Ephraim Goodweather (House of Cards’ Corey Stoll) and his New York City-based CDC team, as they investigate a plane that mysteriously shut down and went cold moments after landing.

PLANE AND SIMPLE | Upon searching the aircraft, Ephraim and his partner, Nora (Alias’ Mia Maestro) find that most of the passengers are DOA, all of them exhibiting symptoms like discoloration and strangely elastic skin. But four of the 210 on board have somehow survived the ordeal, and they’re forced into quarantine. Great! Investigation over!… Right? So, so wrong. As Ephraim, Nora & Co. continue investigating what they assume is a virus, they enter the airport’s cargo hold to find a nine-foot-tall carved wooden coffin — which wasn’t on the airplane’s manifest — that’s filled with soil and features a latch on the inside as well as the outside.

HISTORY REPEATS ITSELF | In Harlem, pawn shop owner Abraham Setrakian (played by Game of Thrones’ David Bradley) immediately makes himself known as a badass when he thwarts two robbers trying to hold up his store. But Abraham also has a few extra-creepy tricks up his sleeve: The virus that took down Regis Flight 753 is one that also appeared years ago, and it seems to have taken quite the toll on Abraham. (The first clue? A jar in Abraham’s basement that seems to contain an enlarged, throbbing heart, which he feeds with his own blood.) “I don’t know if I have the strength to do it all over again,” Abraham sighs. “I cannot fail.” So, he grabs his awesome-looking sword and ventures to the airport, where he tries to convince Ephraim that the virus is no joke. All the infected bodies, dead or alive, must have their heads severed, he says, and the soil-filled coffin must not cross the river. Naturally, Ephraim is skeptical and has Abraham arrested, because what’s a horror story without a character who’s never taken seriously?

HEART OF STONE | Meanwhile, it seems there is a method to the virus’ madness, and it’s perpetuated by the Stoneheart Group that’s stationed across town. Led by Thomas Eichorst, who hasn’t aged in decades and knows of Abraham’s quest against the virus, the Stoneheart Group enlists an associate to steal the coffin and bring it across the river, which he’s successful in doing. (No thanks to the CDC’s Jim Kent, who seems to have a previous connection to the Stoneheart Group that doesn’t sit well with him. Also, hi, Sean Astin!)

Of course, attaching Guillermo del Toro’s name to a project means bringing the scares, and The Strain’s first hour has no shortage of them. In a scene that rivals Game of Thrones’ Mountain vs. Oberyn fight, an airport employee gets his life literally sucked out by the show’s Big Bad — called “The Master” — before his head is smashed to pieces. And that brings us back to the aforementioned vampires: The titular virus stakes its claim via violent blood-sucking and fast-moving worms that enter the bloodstream. And although Ephraim and Nora don’t yet know the virus is rooted in vampirism, something tells me they’ll catch on quick after finding a CDC lab tech killed by Flight 753’s not-so-dead passengers.

Suffice to say, The Strain has its fair share of cover-your-eyes moments, which more than make up for the series’ lackluster elements (a dull subplot involving Ephraim’s shaky marriage) and unanswered questions (what’s the deal with Ephraim drinking milk?). For this TVLine writer, returning for Episode 2 is a foregone conclusion.

That’s what we think, but what’s your take? Grade The Strain via the poll below, then hit the comments to back up your choice.