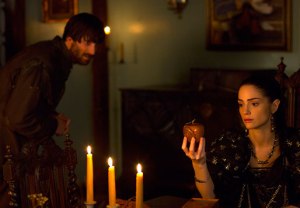 Something recapped this way comes, filled with spoilers from Salem‘s season finale. If you haven’t watched yet, bookmark this page and come again later.

If 17th century Salem was bad for witches, tonight’s episode proves it was pretty awful for fathers too, as more than one character excised their demons (both literal and figurative) by committing good old fashioned patricide.

But that’s not all that went down during the witching hour. Read on to see what happened as the first season of the WGN America drama came to a close.

A TALK TO REMEMBER | The episode picks up right where last week’s ended: With John and Mary surrounded by trees, K-I-S-S-I-N-G, before he jumps back, realizing his dream invading girl is a witch. “Now you know,” Mary tells him, urging him to get away. Except her magic isn’t such a big deal to John; he still loves Mary — invisible warts and all — so he asks her to run away with him. After all, as far as he sees it, they’re in the “land of second chances.” Mary agrees, but first she needs to go back to town and fix a few things. John tells her, “When the moon goes, I go… with or without you.” (Clearly she loves him for more than their sparkling conversation.)

PAPAS GONNA PREACH | Increase finds Cotton by John’s empty prison (“My son, with his customary expression of befuddlement and utter incomprehension.”) and proves he’s really not trying for Salem’s “Father Of the Year.” Cotton accuses his father of having already killed John, but that’s when Increase reveals that he knew John was innocent all along. This time it really is utter incomprehension on Cotton’s face. Turns out John’s real crime is “loving a witch,” or, more importantly, having a witch love him. Cotton doesn’t believe Mary is a witch. But while Increase doesn’t have any evidence, it’s only a matter of time until he cooks some up finds some. Apparently, Papa Mather’s big plan is to use his hounds to track his scent (the guards slipped a scrap of cloth soaked in his blood in John’s jacket) so he can find Mary and John in each other’s arms.

LOCK, STOCK AND TWO BUBBLING CAULDRONS | Mary’s packing her bags when Tituba finds her to talk her out of it. When words fail, she presents Mary with a box with a lock of hair in it and tells her that the child Mary thought she sacrificed all those years ago is still alive. Tituba presents her with her second ultimatum of the day: complete the Grand Rite if she wants to be reunited with her son. (Mary’s day just went from great to WTF?) Mary chooses her son. She gives Isaac the Mallum to put in “a very bad place,” telling him to run away right after. Then she goes to see Increase, where she reveals how she used the Puritans’ fear against them to do the witches’ dirty work. Just as she and Increase come to blows, Cotton interrupts and Mary uses the distraction to magic herself into a chair — handcuffs included. When Cotton points out that Mary’s not in the woods with John, the older Mather moves to kill her, but Cotton stabs him in the back instead. With his dying breath, Increase calls his son “foolish” and orders him to “kill the witch.” Cotton does neither and Mary convinces him to leave town, telling him she won’t tell anyone what either he or his father did to protect the “name of Mather.” So, distraught and riddled with guilt, Cotton hops on a horse and rides out of town.

RITE TO REMAIN SILENT | Increase’s death completes the Grand Rite, Mary explains to his dead body as she transports them out into the woods. That’s where Tituba finds her, still narrating her audiobook talking to herself. They leave his dead body to the same dogs that were hunting John (nice touch of irony, that) and Tituba takes Mary to meet her son, who has clearly inherited his parents’ long, beautiful hair. (Side note: How is everyone fighting frizz?)

ANNE OF UNSTABLE | The Hales spend most of their episode holed up in a secret hideaway sealed by blood — in this case, some poor pheasant. When Hale expresses surprise at Mary success, Anne can’t believe Mary’s the most powerful witch of them all. Actually there’s a lot she can’t believe: why Mary would let so many people die, why they’re hiding from the Grand Rite, and, of course, the fact that she is a witch. In her effort to prove that she isn’t one, she throws quite the witchy tantrum, causing her mother’s head to literally explode, before stabbing daddy dearest in the brain. (Carrie looks like a kitten compared to the similarly blood-covered Anne.)

UNHAPPY ENDINGS | Increase’s men catch up with John, but just as they’re hanging him, an arrow comes and cuts the rope in half. Alas, it’s not a time-travelling Oliver Queen, but presumably the same Mohawks who saved his life last time. John picks up a tomahawk and joins in the fray, only to be shot in the shoulder a second later. Once the fighting calms down, the Mohawks carry him into the woods, to heal him once again.

Off in another part of the woods, Mercy declares herself “Queen of the Night” (and District 12 as it would appear) and claims that it was she who “beheaded the rose.” As for poor, “better than all the Mathers in history” Isaac, he doesn’t heed Mary’s warning to beat a hasty getaway and winds up dead — hopefully reunited with his horse-friend in the afterlife.

Now it’s your turn. Was the Salem finale what you were expecting? Grade the episode via the poll below and then hit the comments to back up your choice!