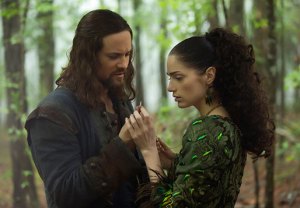 With only one episode left in its freshman season — and the witches’ Grand Rite almost complete — the stakes have never been higher in Salem (WGN America, 10/9c).

TVLine spoke with Shane West, who plays the show’s hero-of-few-words John Alden, about the possibility of a happy ending with Mary, his friendship with Cotton and what exactly goes into getting John’s hair just right.

TVLINE | There are a lot of storylines in play going into this last episode. What can we expect from the finale?
You’re going to begin to get a sense that the world of Salem will be opening up and expanding its boundaries at the beginning of Season 2. Some of these [main characters] will survive, some will not. A few storylines either culminate or change drastically, and some people are leaving town, some people are forced out of town… every character has to begin anew.

TVLINE | On the last episode, Mary revealed she’s a witch. What’s going through John’s mind now that he knows?
He’s shocked because of what happens, but at the same time, he didn’t put it out of his mind that she may be witch.

TVLINE | Do you think John and Mary could ever get a happy ending?
I’m a hopeless romantic at heart, and I certainly hope so. In the world of Salem, and this type of genre, that’s difficult to have happen in the long run. It would be fun to see how many years we can get on a show like this because there’s so much we can talk about. But who knows? John may become a witch by the end of the series and they can live happily ever after and have witch babies. I don’t know. It would be nice to see if they could actually have true love keep them together in the long run.

TVLINE | What about Cotton? He really felt betrayed by John on the last episode. Will they be able to repair that friendship?
I think they will. … It’s amazing that they became friends to begin with. If they can overlook [Cotton sentencing Giles Corey to death] to form a friendship halfway through the season, I’m sure Cotton will be understanding.

TVLINE | Is that a wig or did you actually grow out your hair?
It is a wig, but to make it look like it’s real and to make the wig work, you have to grow your hair out personally a pretty decent length. For instance, the side burns or the sides or the back of the hair grow out. If the wig moves away from that area, your real hair will take its place, and if it’s the same kind of length and color, that makes it look very real.