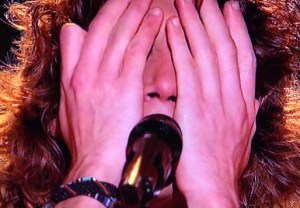 “Blah Blah Blah,” goes one of the more memorable refrains from The Artist Formerly Known as Ke$ha. (Please take a moment of silence on behalf of the dropped dollar sign.)

On tonight’s installment of ABC’s Rising Star — which featured a trio of head-to-head contestant duels — the uni-monikered diva managed to prove even less eloquent as a reality-competition judge than she does as an “artist,” praising one contestant’s cascade of hair, getting smitten with another fella’s beard and whining about how hard it is to vote “no” to an amateur singer’s dreams — while presumably receiving a seven-figure salary in the process.

Even more depressing, however, than the judges’ mind-bogglingly terrible decisions in two of the three duels was the fact that the viewing public proved unable to veto their foolery.

(For the uninitiated, the “Duels” round pits two contestants against each other. The first contestant performs a song without the Rising Star wall; each judge casts a vote worth 7% of the total, while voters who check in on the Rising Star app vote “yes” or “no” for a contestant advancing. The second contestant then performs behind the wall, while the judges and public vote again. The singer with the higher percentage of “yeses” then advances to the quarterfinals, and if it’s the latter combatant, the “wall” raises in a blaze of feigned glory.)

For serious reals, the preceding pargraph gave me a mild bout of acid reflux, so let me jump right ahead to assigning letter grades for tonight’s performances:

Will Roth, “Wrecking Ball” — Grade: D
vs
Jesse Kinch, “Whipping Post” — Grade: B
Jesse Kinch advances with 90% of the vote (including all three judges) over Will Roth’s 57% (with Brad and Kesha voting “yes”)

What did you think of tonight’s Rising Star? Who were your faves? Vote in our head-to-head polls below, then expand on your thoughts in the comments.