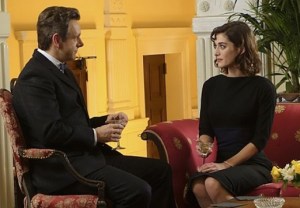 In the second season premiere of Showtime’s heartbreakingly brilliant Masters of Sex, Virginia marvels at how the reaction to Bill’s calamitous presentation of their study has been “like nuclear rain falling on us all.” Not only has Bill been canned, but horndog doctors have begun propositioning Virginia left and right (and even following her into the ladies’ room, for Pete’s sake!). But, by the end of “Parallax,” the stage is set for things to get much better for the illicit lovers… and much, much worse. Read on, and I’ll tell you all about it!

IF AT FIRST YOU DON’T SUCCEED… | After Barton’s plan to “cure” his homosexuality through electroconvulsive therapy doesn’t yield the desired results, he breaks out his stash of muscle-man magazines before attempting to get it on again with Margaret. And at first, it seems like it might work. However, when he asks her to turn her back and give him a rear view, she draws a line in the sand bed. There’s only a shred of her left that feels like a woman, she says, and she can’t let him take that away, too. She just can’t. In response, he waits until she and Vivian have gone shopping to sneak down to the basement to hang himself. Thankfully, he fails at that, too – his wife and daughter find him before it’s too late.

BUSINESS AS UNUSUAL | Meanwhile, when not discovering dildos on her desk (thanks, catty secretaries!), Virginia begins selling Cal-O-Metric diet aids to cover the bills that her puny paycheck from Dr. DePaul doesn’t; fibs for a “reformed” Austin, whose wife announces over the hospital P.A. system that he’s been shtupping her kid sister, “the last woman in all of St. Louis that [he] hadn’t skewered like a pig”; and breaks it off with Ethan – over the phone (ouch!) – in order to carry on with Bill. That is, to carry on THE WORK with Bill. Of course, when she makes that distinction to her lover, he stings her right back by reminding her that he’s a happily married man. (Yeah, sure.) So, in other words, in spite of his grand declaration in the season finale and in spite of her dumping Ethan, Bill and Virginia are – and apparently will continue for some time to be – maintaining their habit of confusing pleasure and pain, dependency and devotion. Got it.

HELP WANTED | Though Libby moves heaven and earth to get Bill some face time with Memorial Hospital’s Dr. Greathouse (the Axeman from American Horror Story: Coven) at a whooping cough fundraiser, her grateful husband maintains that he’d prefer to “be boiled in oil” than suck up to anyone to get a new job. Luckily, he doesn’t have to do any sucking up. A chance encounter with Betty and her spouse, Gene, results in the pretzel king making such a big donation to Memorial that Bill doesn’t just get hired, he gets hired WITH his sex study as a part of the deal! (Apparently, guys who sell pretzels have a lotta dough… signed, Fozzie Bear.) Naturally, Bill being Bill, he still isn’t happy. (Is he even capable of happiness?) Left alone with his son for a while, he blasts the stereo rather than respond to Johnny’s crying. Happening upon the scene, his mother suggests that, um, maybe there are some issues they should address. Nope, Bill retorts. He’s shagging Virginia and has no intention of stopping. In fact, at this point, “I am my father,” he declares. And, before we – much less Essie – know it, she’s been sent packing back to Ohio, and Libby has been told to hire a nanny. And, lest Libby think the subject is open for discussion, Bill adds, “It’s the last time we’ll speak of it.” Well, okay, then.

OK, your turn. What did you think of the season premiere? Will it have you, er, turning on the show again next week? Hit the comments!