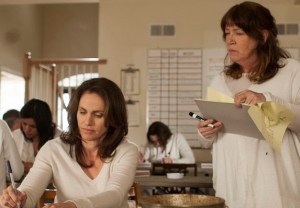 We’ve got questions, and you’ve (maybe) got answers! With another week of TV gone by, we’re lobbing queries left and right about shows including The Leftovers, Teen Wolf, The Fosters and Suits!

1 | What was the more impressive feat on The Leftovers: Kevin fixing up his ransacked house in a matter of weeks, or Laurie taming her frizzy hair?

2 | Won’t Mary rescuing John in Salem make it seem like he was a witch after all?

4 | Are we actually supposed to be frightened of Devious Maids‘ timid, glass-eyed villain Ty? And if you were Zoila, would Pablo’s decision to give a kidney to Genevieve sway you to take him back?

5 | Did Rising Star‘s Gabrielle Nicole kill her own chances at winning with her obnoxious display of ego — claiming her opponents should be afraid to face her during head-to-head duels? Or is the rest of the field so weak that she’ll steamroll ’em despite her sour personality?

6 | With Beauty and the Beast Season 2 now behind us, are we ready to admit that Vincent’s “ability” to “sense” exactly what took place at a location is one of TV’s biggest storytelling cheats?

7 | Did any other Teen Wolf viewers think the Benefactor and the Mute were the same person? So many new villains, so few actual introductions.

8 | After Angie’s body was found on Under the Dome, why didn’t Barbie put even a shred of effort into getting the locker door open? A plane was used to drop pesticides all over Chester’s Mill, but no one thought to grab a sledgehammer and break the locker open? 9 | Did this 24: Live Another Day closed-captioning show up for anyone else? Just us? Oh, and the way Chloe kept tumbling and tumbling down that hill after leaping from Cheng’s vehicle, did it remind you of Westley and Buttercup? And does Ross McCall have one of the most thankless roles in 24 history?

10 | After the super dramatic/misleading promo for this week’s The Fosters, were you disappointed that Robert Quinn and his family weren’t hiding some terrible secret?

11 | Did you swoon over Dom’s admission on Mistresses that he had a detailed plan in his head for a dream life with Savi or did you feel a little queasy when he revealed he’d concocted said plan on their first case together (AKA when she was still married)? And is it possible Zack is secretly trying to ruin her life — payback for the accident that quashed so many of his own dreams?

12 | Has any guest judge in So You Think You Can Dance history come close to Misty Copeland’s level of specific, actionable, technical critique? And would you be OK if she took over the seat permanently — putting an end to the usual carousel of visiting panelists?

13 | Has there been a better role upgrade in recent memory than Nic Bishop going from Body of Proof to Covert Affairs?

14 | Was anyone else surprised by Pretty Little Liars‘ full-on Aria/Ezra sex scene this week? Pretty sure we wouldn’t want to watch that with our entire (ABC) family.

15 | Shouldn’t Tyrant at least give us some indication that a scene is, theoretically, being spoken exclusively in Arabic? That, for example, Barry got through the council meeting using his 20 years-dormant grasp of the native language?

16 | Isn’t it a relief knowing that April’s family on Chasing Life knows about her cancer? And does Dominic have a closet full of gray vests we don’t know about? 17 | After a promising pilot, did Finding Carter veer too much into cliched high school drama in Episode 2? And does Alex Saxon’s role as Carter’s ex Max signal that a break-up is ahead for The Fosters‘ Wyatt and Callie?

18 | Graceland’s Charlie didn’t worry that the FBI might find it odd to be cutting a check to an informant with the same name as a recently murdered agent’s wife?

19 | How many Suits fans out there screamed “Noooo!” at their TVs when Logan went to kiss Rachel? Or has Mike’s recent behavior made you start rooting for him and Rachel to break up?

20 | How many hours do we think Elisabeth Hasselbeck spent writing and rehearsing her barely-coherent, clumsy anti-Rosie tirade before she delivered it on Fox and Friends? 21 | Did Whoopi Goldberg lose a whopper of a bet or is there some other explanation for the ruffled pantaloons she wore on The View this Thursday?

22 | Now that the Emmy nominations are over, can we give Mindy Kaling some kind of prize for staying poised after her show got snubbed across the board?

23 | Should Project Runway partner with Once Upon a Time and fast-track a challenge for the coming season where they get to makeover Captain Hook?

24 | How did Big Brother‘s Zach — who started the season saying he hates “everyone who breathes” — manage to become a likable contestant? 25 | Are we sure that Welcome to Sweden‘s Greg Poehler and Greg Kinnear aren’t the same person? And with allllll of those subtitles, should the comedy have been titled Welcome to Readin’?

26 | Wait, what is Val Emmich (Ugly Betty‘s Jesse and Liz Lemon’s “boy toy” on 30 Rock) doing in (an admittedly adorable) ad for Untied Airlines? And why hasn’t some smart network picked him up as the lead in a rom-com type series?