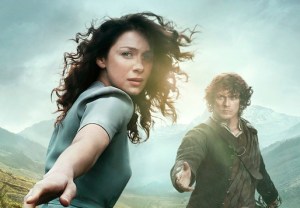 Starz’ adaptation of Outlander is getting an early delivery.

The network will make the premiere of the highly anticipated new series available via multiple TV and online platforms beginning Aug. 2, ahead of its Aug. 9 broadcast debut.

Additionally, the 16-episode first season will be split into two halves, with the first eight hours airing through Sept. 27, Starz announced at the Television Critics Assoc. summer press tour in Beverly Hills on Friday. The second half of the season will run in early 2015.

The series, adapted by Battlestar Galactica‘s Ronald D. Moore, follows the story of Claire Randall (played by Caitriona Balfe), a married combat nurse from 1945 who is mysteriously swept back in time to 1743, where she is immediately thrown into an unknown world. When she is forced to marry Jamie Fraser (Sam Heughan), a chivalrous and romantic young Scottish warrior, a passionate affair is ignited that tears Claire’s heart between two vastly different men in two irreconcilable lives.