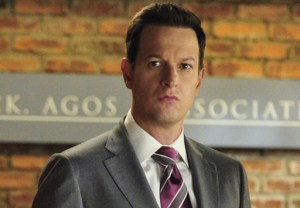 The Good Wife is bringing Josh Charles — but not his dearly-departed alter ego Will Gardner — back into the fold in Season 6.

The actor, fresh off his supporting actor Emmy nomination, tells TVLine that he’s slated to direct another episode of the CBS drama later this season.

This will mark Charles’ fourth time calling the shots on The Good Wife, following Season 4’s “The Art of War” and last season’s “The Next Month” and “Tying the Knot.”