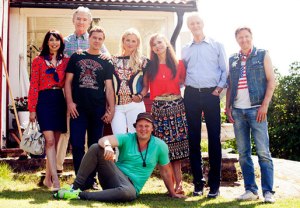 A wise man once said, “I would do anything for love… but I won’t do that.” (And don’t you tell me Meat Loaf isn’t wise.)

On NBC’s freshman comedy Welcome to Sweden, which debuted Thursday at 9/8c, it seems our protagonist Bruce should have taken those words to heart.

Based on the life of executive producer and star Greg Poehler, Sweden finds Bruce uprooting his life and relocating to Sweden to spend more time with his wife, rather than capitalizing on his lucrative career as a celebrity accountant in the United States. (Clients include Greg’s real-life big sis, Amy — you may have heard of her? — who hilariously appears as herself, only way more snobby and obsessed with her iPhone.)

Of course, once Bruce joins wife Emma (played by Swedish actress Josephine Bornebusch) in her native land, it turns out her place is getting renovated, and they’re forced to live with Emma’s parents for two weeks — parents who, as Emma describes them, are “so Swedish.”

Enter Emma’s family members, who are all at once traditional and quirky Swedes: There’s mom Viveka (Lena Olin, Alias), whose first of many problems with Bruce is his height, or lack thereof. (“Average height? No way. Maybe if you include children and Asian people.”) There’s dad Birger (played by Swedish actor Claes Mansson), whose interaction with non-Swedish-speaking Bruce is basically reduced to sighs and the occasional “Yes.” And rounding out the clan is Emma’s slacker brother, Gustav, and America-obsessed uncle, Bengt.

During Bruce’s first day in Sweden, Emma’s family forces a number of traditions on him, including knocking back shots first thing in the morning and hitting the sauna for a naked sweat sesh after dinner. (Yes, that entire last sentence is accurate, I promise.) And, as it’s revealed throughout the episode, Bruce and Emma’s stories of their first date don’t exactly line up; she remembers an enchanted evening at a romantic restaurant, while he was so wasted, he can barely remember how gross the dive bar was.

In fact, Bruce and Emma seem so inherently different on every level that rooting for their relationship isn’t always easy during the premiere. But when the two have a heart-to-heart on the dock during sunset, you can’t help but get the feeling that everything’s going to be all right. All told, Sweden‘s peculiar ensemble cast and chuckle-worthy one-liners make the show a charming summertime treat.

That’s what we thought, but what’s your take? Grade the series premiere via the poll below, then hit the comments to back up your choice.