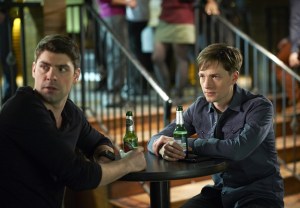 On Thursday’s Rookie Blue, Chris officially crosses the line, while Duncan proves to be the bad gift that keeps on giving to Andy.

UNDER PRESSURE | Chris’ drug dealer notes that the cop is starting to get the “my best customer look,” and when Dov and Chris go undercover at a bar to find out who’s selling guns to frat boys, Chris’ worlds start to collide. His dealer is also there, and he wants his money. To keep his cover, Chris is forced to arrest him for possession. Since he hasn’t been charged yet, Chris tries to convince him that he can get him out — if he becomes a criminal informant. The dealer threatens to make a deal with the prosecutor and name Chris. Who’s going to believe him, argues Chris. So the dealer gives up a name, but Steve proves unimpressed with the intel. In order to save both their behinds, Chris swaps the drugs with baking soda, and the dealer goes free. “Don’t think for a second I won’t come back to collect,” he warns Chris. So what’s going on with the cop that’s caused him to spiral so spectacularly? The answer may lie in an exchange with Dov. After losing his family last season, “all I’ve got is this job, and lately, I’ve been screwing that up, too,” Chris tells him.

BAD NEWS ROOKIE | Andy’s troubles with Duncan are far from over. He’s not going away quietly and has made allegations against her. Now, an investigative committee is going to subpoena all her reports, which were probably nicer than they should’ve been. She left stuff out to put a positive spin on things, hoping Duncan would get it together. In the meantime, she’s to have no contact with Duncan, and Sam gives her “the workplace equivalent of pity sex,” a missing persons case. Needless to say, Andy’s day really sucks. But at least it gives her and Sam a chance to look to the future and banter about spots to retire. (He likes it cold, she likes it hot.) HOT NIGHT | During the undercover sting, Nick hits it off with a pretty, female bartender named Essie. They flirt while Traci and Steve listen in back at the station. “Guy’s got game,” notes Steve, but Traci is not impressed. “Really? You think we fall for that?” she marvels. At the end of the night, Nick tells Essie she looks even better than when she started working. OK, that might work on her, admits Traci. Too bad, because just when it looks like Nick might finally get lucky, he has to arrest his flirting partner. Turns out she’s the one trafficking illegal firearms! (Can’t Nick catch a break just once?)

RETAIL THERAPY | Gail is still reeling from the death of the mother in last week’s episode. This being Gail, she doesn’t grieve in the normal way. She keeps buying random stuff and giving it away, prompting Chloe to worry about her. “I just don’t want her shaving off all her hair and then buying one of those Amanda Bynes turquoise wigs,” she tells Oliver, who finally confronts Gail. She can’t explain why this case has affected her so much when they’ve seen worse ones. “It got you. So it is the worst for you,” he says comfortingly. Oliver may not like being chained to a desk, but he’s kind of a great captain.

Rookie Blue fans, are you surprised no one’s fully caught on yet to what’s going on with Chris? Were you disappointed Nick didn’t get to score? And Duncan’s stepfather is totally pulling all the allegation strings, yes?