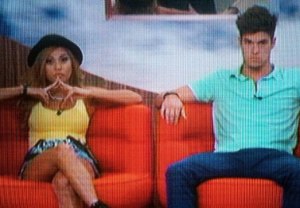 For fans of Big Brother, perhaps the most upsetting realization during Thursday’s live eviction was that the one person everyone wants gone — Devin, without a doubt — couldn’t be sent packing.

Instead, the house gathered to decide the fates of Paola and Zach, two contestants who just couldn’t resist getting feisty throughout a volatile week in the BB house.

Before we revisit Thursday’s live eviction, let’s first recap how we got here.

THE WEEK SO FAR | After Devin was reminded that he had a young daughter at home, he had a renewed commitment to playing with integrity — which, by the end of this paragraph, will feel like a truly hilarious memory. He confessed his prior sins to the house, then nominated Paola and Brittany (the latter of whom was mostly his target for leaving hand lotion in the kitchen. True story!) Amber nominated Nicole and Hayden, who later won the Battle of the Block competition and were sent straight back to safety. Most everyone in the Bomb Squad realized that Devin was playing an untrustworthy game, but only Zach — who has somehow become a contestant to root for? — stood up to Devin and told him he wasn’t on board with evicting Brittany. Devin won the Power of Veto, and after a change of heart, opted to remove Brittany from the block (they’re both parents, after all!) and replaced her with Zach.

THE STRATEGY | And that brings us to this week’s Veto meeting, which goes down like this: Brittany calls out Paola for throwing the Battle of the Block competition — “She wasn’t wearing her glasses. She never goes anywhere without her glasses,” Brittany claims, while Paola is sitting there without her glasses on — which prompts Paola and Zach to both throw in their two cents. Paola admits that Devin told her to throw the competition, while Zach utterly eviscerates Devin, making it quite clear that the current HoH is his target, should he remain in the house. And while the entire exchange is chaotic and a bit embarrassing for everyone involved, I do have to credit Paola for responding to Zach’s “You suck at everything” comment with a cool, “It’s true.” Embrace it, Pow-Pow. You’ve really got nothing to lose. And although Zach’s fellow Bomb Squad members toy with the idea of evicting him after his outburst, they ultimately decide it’s better to keep such a big target in the house.

THE VOTES | When it comes time for the voting to begin, Paola gives what I would consider The Best Pre-Eviction Speech Ever, if only for the words, “Devin, you have five different personalities, and they all suck.” Zach’s is less memorable, but it hardly matters in the end. He remains in the game after his fellow housemates evict Paola, 10-2. (Only Jocasta and Donny vote to evict Zach.)

KING & QUEEN OF THE CASTLE | In a game called “Underwater Polo,” contestants hit balls into numbered slots at the end of a lane, with the two highest-scoring players claiming the HoH title. And although Zach isn’t able to claim the power he so desperately wants, winners Derrick and Nicole are two contestants that 1) will likely go after Devin and 2) seem to have a basic understanding of how Big Brother works, which is more than can be said for many of this year’s players.

Were you happy to see Paola leave the house? Who do you think Derrick and Nicole will nominate? And why do this year’s contestants insist on telling the truth all the time? Sound off in the comments!