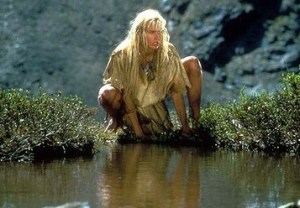 With ABC’s failed 2007 Cavemen sitcom now just a hard-to-fathom memory, Lifetime is taking a big swing at the prehistoric era — with classier source materian than a GEICO ad — by giving a pilot order to The Clan of the Cave Bear, based on Jean M. Auel’s series of best-selling novels.

The one-hour drama project, which is being eyed for a possible 2015 launch, is executive produced by Academy Award-winning director Ron Howard (A Beautiful Mind) and Oscar and Emmy winner Brian Grazer (A Beautiful Mind, 24), along with Allison Shearmur (The Hunger Games: Catching Fire), Linda Woolverton (Maleficent), who is writing the pilot, Francie Calfo (Gang Related, Empire) and Jean M. Auel.

The Clan of the Cave Bear, the first of Auel’s six-book series, is set 25,000 years ago, “when Neanderthals shared the Earth with the first early modern humans and a band of cave dwellers adopt blond and blue-eyed Ayla,” a courageous young woman who fights against “the jealous bigotry of Broud, who will one day be clan leader,” according to a Lifetime release.

The Clan of the Cave Bear was previously adapted as a feature film in 1986, starring Daryl Hannah.