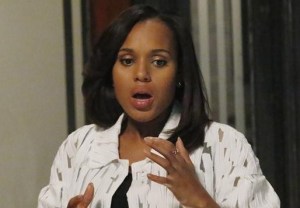 When last we tuned into ABC’s Scandal, Olivia had declared herself to be the scandal in need of fixing, so she accepted sometime-beau/sometime-stalker Jake’s invitation to get away from it all, once and for all. But surely something’s gotta lure her back to D.C., right?

Will it be the news that Harrison (we presume) was indeed shot dead by Tom, at Rowan’s bequest? Or, since secrets don’t keep long at all on Scandal, perhaps Liv will learn that Rowan, and not her mother, orchestrated the murder of Fitz’s son Jerry?

Or maybe, just maybe, Jake’s not all that? The other big question as Season 3 came to a(n early) close regarded the Grants’ marriage, which had been tested over the years in seemingly every way possible, but now had to sustain the tragic loss of a teenage child. Did Jerry’s death crystallize for the couple what’s really important in life, erasing their respective past misdeeds? Or was it the straw that broke the First Couple’s back?

RELATED Eye on Emmy: Bellamy Young on the Scandal Twist That Made Mellie a Survivor (and the One That ‘Killed’ Her)

Rewatch Season 3’s closing montage below (c/o ScandalTVGladiators), then review our pair of polls and share your predictions for how Season 4 will start out.