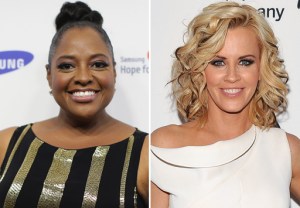 ABC on Monday aired its first live episode of The View since co-hosts Sherri Shepherd and Jenny McCarthy confirmed their departures earlier this month. So, what went down?

Not one to pull punches, moderator Whoopi Goldberg immediately prompted the ladies to address the “giant neon pink gorilla in the room.”

After a brief fake-out (“We’re staying!”), McCarthy spoke first: “After much consideration, I’ve taken a new job that will allow me to do what I do best, which is to talk without interrupting anyone. So stay tuned … even if it does compete with The View.”

Shepherd was up next, and she fought to hold back tears during her entire speech. She said she’s known she was going to depart since the spring, but kept it quiet because she “didn’t want to do anything to distract from Barbara Walters and her retirement in May.”

As for why she’s leaving now, Shepherd said it’s all about the number seven. “Seven in the Bible is God’s completion,” she explained. “My time on The View is complete.”

View-ers, were you moved by Shepherd and McCarthy’s statements? And where do you think McCarthy is headed?Drop a comment with your thoughts below.