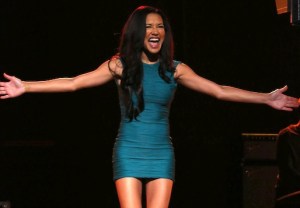 When Glee starts production on its final season later this summer, Naya Rivera’s name will be on the call sheet.

TVLine has learned exclusively that Santana’s portrayer — who dodged rumors this spring that her days on the show were numbered — is returning for Season 6.

RELATED | Glee EP on Season 6: ‘There Will Be a Lot Going On In [Spoiler]

The small-ish catch: Rivera will be billed as a recurring guest star and not as a series regular — a change I’m told she requested (and the producers honored).

Keep in mind, many a Glee vet has seen his or her contract status tweaked over the years and still maintained an active presence on the show (see also: Amber Riley, Harry Shum Jr., etc.).

Rivera’s rep could not be reached, while a Glee spokesperson declined to comment.

Fox has yet to announce a premiere date for Glee‘s (likely abbreviated) final season.