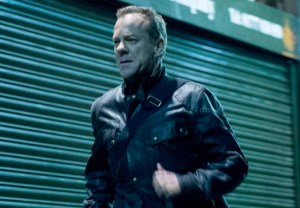 There was much 11th-hour drama as Fox’s 24: Live Another Day entered its, um, 11th hour. Who died, and who will live another… hour?

Barely escaping their shootout with the Russians Mark helped sic on ’em, Jack and Kate follow the override device’s tracker, only to realize that it had been discovered, the place cleared out. But as she was being whisked away by her captor, Chloe had used a dead gal’s cell phone as a recorder — and Jack is all too familiar with the male voice he hears when Kate plays it back. All together now: Chennnnnnng!

Meanwhile, Heller & Co. learn of the fraudulent fire order sent to the U.S. Navy, to sink a Chinese aircraft carrier. That has Heller in hot water with the Chinese, and the only way he can escape an all-out war is by producing both the presumed dead Cheng and the infamous override device.

Jack then shows up at Heller’s to make Mark piddle himself (I must assume) by jabbing a gun at the chief of staff’s temple. See, Jack has gleaned that the only way the Russians could have found him is with the comm link code that Mark, among a previous few people, had access to. POTUS is ready to process his son-in-law to be hanged, but Jack saves Mark’s bacon by finding a use for him, to infiltrate Anatol Stolnavich’s residence in the name of getting the 411 on Cheng, his co-conspirator.

Wearing a camera hidden inside a flag pin, Mark (quite conspicuously, the goof) manages to talk his way into Stolnavich’s place, get eyes on the security system (so that poor, sweaty Gavin can jam the system back at the CIA) and afford Jack a view of the goon detail. Then, while Mark fake-negotiates a defection to Russia, Jack and Kate storm the place, taking out the guards (if I had a gun, I’d totally want a silencer nozzle, FYI). Alas, in the skirmish Anatol got a big ol’ shard of glass stuck in his neck, and once he yanks it out, he bleeds out in a jiffy — after nyah-nyah-nyahhhing Jack a bit.

And then there’s Audrey. Sigh. Wanting to do her part to help Dad avoid a war with China, she reaches out to the daughter of some honcho in the politburo, but that meet-up goes sideways fast, when shots ring out, felling Audrey’s pal and the Secret Service dudes. Audrey’s phone then rings — it’s Cheng, the man who tortured her all those years ago, sending her into a catatonic state. Sit back down on the bench, he says, and you just might live.

* Heller fumbled his meds all over the place, eliciting some concerned looks from the military types he had just been arguing with about not threatening China with nukes. Now that they know Chinese missiles to be airborne, destination unknown, will one of the colonels override POTUS’ wishes?

* Audrey and Jack had an emotionally loaded phone conversation. Tough to stay on Team Renee these days, but I’m fighting the good fight!

What did you think of 24: LAD‘s next-to-last episode? Are you ready to say (a final?) goodbye to Jack, Chloe, Kate et al? And we really are gonna get some “12 Hours Later…/Jack and Audrey on a beach sipping mai tais” epilogue, aren’t we?