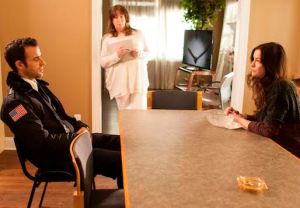 It’s a shame that more viewers aren’t able to focus on the weirdness of The Leftovers instead of its melancholy. If they could, the show — which, by the way, is pretty fantastic — might not already be known as the biggest bummer on television. In this week’s episode — only the series’ second — beleaguered police chief Garvey fears that his bagel has vanished into thin air, making it the first breakfast food to join the departed. And it only gets stranger from there…

LIKE FATHER, LIKE… UH-OH | In fairness to Garvey, he has good reason to be concerned if foodstuffs are going around disappearing on him: He’s afraid that, like his institutionalized dad before him, he’s losing his marbles. It doesn’t help his case that the mystery man with whom he shot wild dogs last week was gone before anyone but Garvey saw him. Even worse, when the guy’s truck does turn up, it turns up in Garvey’s driveway! And the elder Garvey — who, it bears mentioning, argues with people who aren’t present (or at least aren’t visible) — says that someone has been sent to “help.” WTF? It gets more confounding. Later, the mystery man shows up on Garvey’s doorstep with a six-pack and news of another dog pack, and tells him, “We’re doing the Lord’s work, believe you me.” By this point, we might have thought he was a figment of Garvey’s imagination — kinda a Sixth Sense thing — only Jill sees him, too. Curiouser and curiouser…

MIXED NUTS | When not busy trying to keep his s— together, Garvey continues to target the Guilty Remnant and, during a visit to the pledge house, meets Meg. He hopes that her fiancé will convince her to go home, but the guy is so ticked that she ran out on him, he asks, “Why would I do that?” Meanwhile, none too pleased that the GR newcomer has kept the cop’s card, Patti “yells” at Laurie that she’s going too easy on her. But as far as we can see, Laurie is being pretty brutal. Every day, she strips Meg of more of her belongings, she refuses to share her cigarettes, and she instructs her to chop down a tree that’s as thick as a highrise. In the end, whatever she’s doing seems to work, too. Rather than flee the cul-de-sac, Meg renews her attack on the tree with the vigor of a pint-sized Paul Bunyan.

RELATED Save the Dates! More Than 50 July Premieres and Finales

GUNSMOKE | After we learn a bit more about “Holy” Wayne — such as he’s wanted on eight counts of statutory rape and has a thing for Asian girls like you-know-who — the authorities shoot up his compound, and Tom goes so far as to kill one of the Feds to protect Christine. On the run in the wake of the siege, Tom calls his dad but hangs up without leaving a message. (Dang — so close!) When Wayne joins Tom and Christine at their secret meeting spot, he offers to squeeze the poison out of his disciple, but Tom’s all, “Yeah, um, nah, I’m good.” Which only further mystifies Wayne. “You’re all suffering and no salvation,” he suggests. Regardless, he gives Tom a wad of cash and instructs him to lay low with Christine until it’s safe for them all to reunite again. Ditzy as she seems, Wayne insists that Christine is “important.”

CHASING SHADOWS | Last week, we just briefly met Nora, who is sorta famous in Mapleton because she lost her whole family in The Sudden Departure. This week, she tips over a mug at a coffee shop to see how much leeway the barista’s pity will buy her and gains a pair of stalkers when Jill spots a pistol in her purse. “A big one,” she tells Aimee, “not some bulls— lady gun!” Intrigued, the gal pals commandeer the Frost twins’ car and tail Nora to the home of an elderly couple. There — unbeknownst to her pursuers — Nora promises “Departure benefits” if the Pattersons will just answer more than 100 bizarre and awkward questions about their dearly Departed on tape. (We’re meant to think she’s some kind of insurance adjuster, probably. But it seems likelier, doesn’t it, that she’s running around interviewing other Leftovers in hopes of figuring out if there is any rhyme or reason to why the Departed were chosen.)

OK, your turn. What did you think of the episode? And what did you make of the way Mayor Lucy kissed Garvey Sr. — are they a couple? Hit the comments!