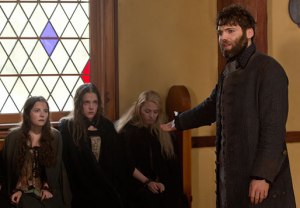 This week on WGN America’s Salem — inthe penultimate hour of Season 1 — father was pitted against son as Increase and Cotton argued for the soul of John Alden. Who came out on top?

It’s a battle of wills — or rather witch-hunting ideologies — as Increase and Cotton argue over who has a better beard whether John’s a witch in front of Salem’s best and not-so-brightest. Increase lists John’s many crimes, including: calling prayer “bulls–t,”entering Mary’s boudoir late at night (she tries to defend him by saying they “discussed politics”) and kissing Anne. John’s scowling demeanor helps no one, though it should be a huge giveaway that Emily’s accusation that he “danced” in the woods is a lie. (John clearly spends all his free time practicing that scowl.)

Cotton eventually throws his bible in the ring and attributes the girls’ testimonies to his father’s torture, before revealing some of the instruments he probably used, eliciting a “How dare you?” from Increase. Cotton parries with, “No sir. How dare you?!” (Even John chuckles.) Point: Cotton.

Increase then accuses John of being a traitor and of killing his fellow soldiers while fighting on the side of the Native Americans, citing Tituba as evidence. John’s silence is taken as an affirmative, so Increase recommends he be killed.

Immediately after, Cotton demands the truth from John and he obliges, telling his friend how the Mohawk (a different tribe than the ones they were fighting) saved his life, healing him. He then lived among them until one day the militia burned down the village and slaughtered all the women and children. In his rage, John hunted down those men, killing almost all of them. Cotton’s hurt by the revelation, not sure if he was ever John’s “friend” or just a “pawn.”

While this is happening, Isaac finds Mary sobbing over John’s fate. He tells her that she can save John because she’s “Magic Mary.” Following his pep talk, Mary visits John in his cell. And though tells her to leave, she refuses, saying, “You are my life.” He tries to argue but she tells him to dream with her once last time, and they kiss.

When John opens his eyes, it’s morning and they’re both in the woods. He gasps and steps back in shock, realizing his lady love was the Big Bad Witch all along.

* Mercy’s hanging out in her pit of corpses when Mary — looking very much like Elizabeth I crossed with the Evil Queen — shows up and promises her that death is coming and that she intends to “cleanse this land of evil.” Inspired, Mercy pulls a Spider-Man and sneaks into Increase’s torture room and convinces her friends to testify against John.

* Anne showed up on Cotton’s doorstep asking, “Do you think it’s possible to be a witch and not even know it?” before demanding he examine her for the mark of the devil. It’s clear Anne quite enjoys Cotton’s ‘lay back and frisk’ technique, revealing red eyes and a snake tongue at one point, but Cotton doesn’t catch that because he considers the whole experience torturous, averting his eyes the entire time. (Which totally goes against Witch Hunting 101. Sigh…)

* Increase breaks his promise to the four girls who testified against John, hanging them anyway. When Mercy hears the news, she tells her friend to bring her “the young, the poor and suffering.” All that’s left now is changing her name to “Liberty.”

What did you think of Salem‘s big reveal? Are you sad that Cotton and John aren’t friends any more? Can you come up with a better nickname for Mary?