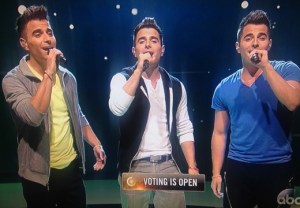 “I think it’s all about heart,” declared Ludacris, kicking off this week’s episode of Rising Star — and in the process, betraying a fundamental misunderstanding of why people enjoy reality-singing competitions. “America wants to know if you have heart!”

No, Luda, America wants to know if these contestants can sing in tune. (Spoiler alert: Most of them cannot!)

RELATED Save the Dates! More Than 50 July Premieres and Finales

In that same vein, we are not concerned with whether or not they’re wonderful parents. We could give a flying fig if their daily abdominal routines have prepared them to whip off their shirts for tips on the Sunset Strip (or out in the parking lot adjacent to Kesha’s SUV). And we don’t care if they’ve endured some sort of crippling personal loss — because that in itself doesn’t make you a pop star, it just makes you human.

Then again, in the instance of tonight’s sole standout performer, Gabrielle Nicole, it’d be nice if you showed just a modicum of humility, didn’t come right out and tell the entire viewing audience that you’ve decided you’re the front-runner after a single, solitary performance. (For those of you who fast-forward through the filler, Gabrielle replied to host Josh Groban’s query about who she feared most in next week’s head-to-head battles by noting her competitors should worry about who’s winding up against her.) #GoodLuckWithThatStrategy

In all honesty, though, given the shocking shallowness of Rising Star‘s overall bench and the surge of awkward desperation from its judging panel — tell me I wasn’t the only one who wanted to crawl under the couch and turn to dust after Kesha asked chiseled triplet act TX3 to show her their torsos — maybe an early elimination is the greatest win of all.

Since I apparently am genetically programmed to watch any show that combines “singing” and “voting,” however, let me offer some letter grades for tonight’s singers, then pass the mic to you.

Dana Williams, “Stay”
(advanced with 87% of votes, including all three judges)
Her phrasing was stilted and her final set of runs were pretty grim, but she still managed to give my second-favorite performance of the night. Hurrah?
Grade: B-

Unselfish, “Some Nights”
(rejected with 46% of the votes, with only a “yes” from Kesha)
I won’t remember the barely-there harmonies, but that one dude’s rolled denim shorts? Etched in my brain forever, alas.
Grade: C-

Cliff Cody, “I’m Gonna Be Somebody”
(rejected with 49% of the votes, with only a “yes” from Brad)
Hopefully it’s not too late for him to resume his nursing career — and limit his singing to karaoke night with coworkers.
Grade: D+

Audrey Kate Geiger, Sam Smith’s “Stay With Me”
(advanced with 84% of votes, including all three judges)
Ludacris insisted Audrey’s voice was “unique” while Brad compared her to “Macy Gray” — which makes me pretty certain the male judges were mentally compiling their grocery lists during the performance. I mean, Audrey sang mostly in tune, but her voice was as indistinct as a kernel in a bag of movie-theater popcorn.
Grade: C+

Oh.M.G., “Lights”
(rejected with 33% of the votes, with only a “yes” from Kesha)
Wouldn’t this duo’s name have been more accurate with a strategically placed “F” — a word I might’ve uttered when the male half briefly took over the solo line.
Grade: D

Gabrielle Nicole, “My Man”
(advanced with 90% of votes, including all three judges)
Dropped several choice soundbites before her performance — “I want the wall to raise as much as people want gas to go back to 99 cents a gallon,” Gabrielle kidded — and backed her confidence up with range, power and grit. Too bad she undid all that good will later in the show with an unbridled display of arrogance.
Grade: A-

Karen Hornsby, “To Love You More”
(advanced with 82% of votes, including all three judges)
When even the judges admit to voting “yes” because of your heartbreaking back story, then you know you’ve got some serious vocal work ahead of you.
Grade: D+

TX3, “Keep Your Head Up”
(rejected with 22% of the votes, with only a “yes” from Kesha)
Snap Poll: Would these fellas have raised the wall if they’d followed Kesha’s advice — and their prior formula for success — and removed their shirts? Second snap poll: How quickly would you have turned off your TV set had the triplets gotten in touch with their inner Chippendales?
Grade: F+ (+ earned for surviving Kesha’s sexual harassment with dignity)

Sky Griffin, “Only Girl in the World”
(rejected with 28% of the votes, with only a “yes” from Kesha)
Compared to some of the acts that’ve gone through, I thought Sky was actually kinda tolerable in spots. Without those cripplingly tight booty shorts cutting off her circulation, who knows what percentage of notes she’d have hit!
Grade: C

Morgan Higgins, “Alone”
(advanced with 79% of votes, including “Yeses” from Kesha and Ludacris)
Everything Morgan knows about music, she learned from watching Lea Michele on Glee.
Grade: C

What did you think of Episode 3 of Rising Star? Did Gabrielle’s cocky comment turn you off? Was there anyone other than Gabrielle you’d want to hear singing again? Did anybody strike you as a future chart-topper? Sound off below!