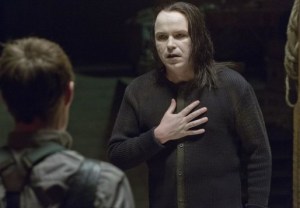 THE PERFORMANCE | Although Penny Dreadful has dazzled us with everything from vampire attacks to demonic possessions, the series’ most resonant moments may also have been its most human. Hear Read us out. In the first season finale, Frankenstein’s monster – Caliban to his friend, singular – was shown compassion once too often by his crush, Grand Guignol starlet Maud, setting in motion a series of events that allowed Kinnear to shine a spotlight not only on the lost soul’s rage but also, memorably, his loneliness and despair.

Cast out of the only home he’d ever known after kissing (and then, oops, throttling) the object of his affections, Caliban turned up on the doorstep of his maker. Not because he hoped for understanding — if only! — but simply because he had nowhere else to go. Why did Victor allow him to feel, the Victorian Lazarus wanted to know. Why hadn’t he fashioned him of steel? So intense was his sadness that, despite the fact that the mad scientist had discreetly pointed a pistol at his head, even he couldn’t pull the trigger.

Instead, Victor set about expediting Brona’s demise and resurrecting her as the companion for whom Caliban longed — Kinnear watching the procedure with the unabashed wonderment of a child observing Santa Claus in his workshop. And, while we have a sinking feeling that Brona won’t swoon when she meets her “match,” we couldn’t love Caliban — or Kinnear — more. Richens’ contemporary routine during the first live telecast of So You Think You Can Dance‘s eleventh season. And the hyperactive judge’s choice of words to describe the duo’s execution of a Sonya Tayeh piece was far from accidental. Indeed, as Ricky and Jessica leapt, stretched and glided to the otherworldly sounds of Meredith Monk’s “Vow,” their eye-popping extension and stunning synchronization took a back seat to an even more impressive achievement — taking the audience on an emotional journey that was equal parts haunting, hypnotic and, yes, transcendent. The vivid, beautiful pictures Jessica and Ricky created with their bodies landed at the rare intersection of artistic and sacred; if they can maintain this level of excellence, their march toward the finale should be all but guaranteed.

HONORABLE MENTION | We knew (or at least hoped) the moment was coming, and 24: Live Another Day‘s Yvonne Strahovski made it very much worth the wait. The instant that CIA agent Kate Morgan learned that station chief Navarro had framed her husband for selling secrets to the Chinese — a traitorous charge that ultimately led Adam to take his life — Strahovski let surface the despair of a wife needlessly widowed. But that mood quickly shifted when Kate had Navarro in her sights, and she lunged forward hungry for a pound of flesh. She would wait, though, later pulling her gun on Navarro in the infirmary, seemingly defiant of Jack (“Back off, Bauer!”) and poised to, as she told her target, “put a bullet in your head!” Yes, the heated confrontation was revealed to be an orchestrated ruse to make Navarro divulge intel, but Strahovski made clear the genuine hurt and fury behind Kate’s litany of grievances roared at her bad-man boss.