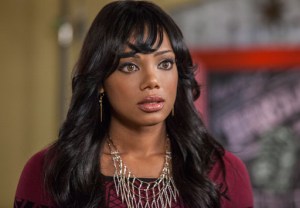 Rosie (Dania Ramirez) will require a little help with the “housework” if she’s going to save her aged and infirm employer “Mr. Kenneth” from his embezzling nephew Reggie on this Sunday’s Devious Maids (Lifetime, 10/9c).

Tiffany Hines, who plays Kenneth’s much younger (and currently estranged) wife Didi, tells TVLine that task will prove quite challenging for Rosie because of the “malevolence” between Didi and Kenneth’s daughter Lucinda.

Below, Hines previews Rosie’s plan — and whether Didi and Kenny have a chance for a happy ending. TVLINE | It looks like Rosie might have a plan to thwart Reggie. Does she go to Didi and Lucinda for help?
Rosie’s in a very difficult place because, even though she knows what Reggie is up to and even though she wants to do everything she can to save Mr. Kenneth, if she goes against Reggie, she and her son Miguel might be deported back to Mexico. On top of that, Didi and Lucinda have a lot of hatred between them. So it’s going to be difficult for her to get them on the same team. She’s going to have to get very creative in order to get them to work together to help save the family — without ruining the circumstances of her own family.

TVLINE | As Rosie’s immigration lawyer, Reggie has a lot of leverage over her. Will the Millers step in and help?
Rosie is obviously very close with the family, but I’m not sure if at this point they’re even aware that Reggie is holding that over Rosie’s head.

TVLINE | Didi and Lucinda have been at odds since the season premiere. How hard will it be for them to join forces?
There’s a lot of animosity between Didi and Lucinda in regards to Didi’s relationship with Kenny. When Lucinda belittles and resents the relationship between [Didi] and Kenny, Didi only sees Lucinda as the enemy. This conflict between the two of them is what facilitates Reggie’s plans to tear the family apart. Overcoming this malevolence between Didi and Lucinda is really going to be the challenging factor in determining if they’re going to be able to successfully take Reggie down.

TVLINE | Do we see a moment where both Didi and Lucinda realize that their being at odds with each other is what led to this?
We’re going to see them come to terms with the fact that they have a choice to make [about] whether they’re going to keep battling one another or if they’re going to combine forces and work as a team. That’s going to be challenging for them because they really have a lot of hatred between them.

TVLINE | What do you think about Didi and Kenny’s relationship?
I love Didi and Kenny’s relationship. A lot of people when they meet Didi think she’s a gold-digger that just wants to take Kenny’s money. But one of the things that I love about working with Marc Cherry is that he has all these complex characters. Didi likes to have a good time. She knows what she wants and exactly how to get it. But at the same time, she’s a little child-like, there’s a little insecurity inside of her. That’s why she craves these material things so much, because it makes her feel good about herself. This is what Kenny is able to give her. He lavishes her with nice things and dotes on her with constant attention. This fills that empty space inside of her and gives her a sense of self worth. That’s why the two of them really work for one another and why there’s really a lot of love there. It also explains why when Kenny falls ill and he’s not able to give her that attention, she ends up seeking someone like Dr. Sanders, to fill that void when Kenny is no longer able to fill it.

TVLINE | Now that his health is improving, and they’re both feeling remorseful, is there hope of Didi and Kenneth reconciling?
Didi has committed the ultimate betrayal by having this secret affair with Dr. Sanders. There’s a lot of forgiveness needed in order to save the relationship. And that’s something that this next episode is going to focus on, if the two of them really do have enough love between them to repair what is broken. TVLINE | Will Didi and Lucinda ever be able to successfully coexist?
There’s so much history that when it comes to things that are important, they are going to try to overcome their issues. But I highly doubt that they will be best friends. They’ve said so many hurtful things to each other — and that’s the foundation of their relationship. But they are a family [and] they both love Kenny. That one factor they have in common can help them to overcome that. [However] that animosity will always be there.

TVLINE | Has it been a challenge to try and make Didi likeable, since she’s cheating on her elderly stroke-victim husband? Or did you not even worry about that in your portrayal?
It’s very easy to see a character in one way. I wanted to try and find a way to make it believable that she really loves him and find the justification of why she decided to be with Kenny. I wanted to find a way to make Didi likeable, to give a lot of layers to her. Yes, she likes nice things and being taken care of, but she also loves him. I had to find why she’s going for someone like Kenny, [so] I started exploring this part of her where there’s something missing inside of her to where she doesn’t have a lot of self-worth. These nice things and having Kenny tell her she’s beautiful, whisking her away on vacations and really romancing her, made her fall for him.