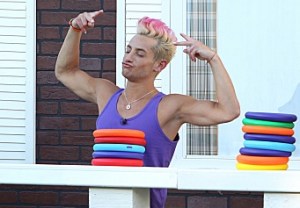 Big Brother‘s live eviction drew 5.1 million total viewers and a 1.6 rating on Thursday night aka July 4th Eve, down sharply week-to-week and off two tenths from Wednesday’s telecast, but still topping the night in the demo.

Overall TV usage for the holiday weekend-adjacent night was down 15 percent, while numbers are especially subject to change due to holiday programming preemptions and Hurricane Arthur storm coverage.