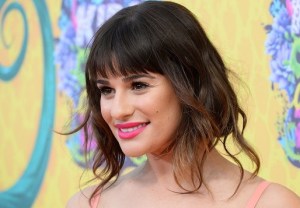 A day after Chris Colfer’s faux announcement that he was fired from Glee, co-star Lea Michele “revealed” on the social networking service early Friday that she was expecting her first child. But the actress’s rep confirms to TVLine that Michele was also the victim of a hacker.

“Before this gets out to the media, I would like to announce to my fans that I am pregnant,” read the Tweet, which ended with, “#BabyBoy.”

The news was instantly met with skepticism, and not just because of the Colfer incident. Barely a week ago, the actress was photographed taking a surfing lesson in a string bikini.

But the question remains: Who is twe-orizing the stars of Glee? And what is his/her end game? Speculate away in in the comments!