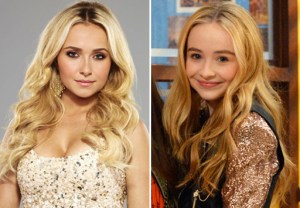 We’ve got questions, and you’ve (maybe) got answers! With another week of TV gone by, we’re lobbing queries left and right about shows including Girl Meets World, Under the Dome, 24: Live Another Day and Pretty Little Liars!

2 | Wait, so after we spent the entire first season of Penny Dreadful chasing after Sir Malcolm’s daughter, their reunion was shorter than Proteus’ lifespan? And after all the hints the show dropped about Ethan being a werewolf, was anyone surprised by his transformation?

3 | Is True Blood greatly overestimating the appeal of Tara’s mom? And of all the dimwitted Bon Temps residents, how was Maxine Fortenberry the first to question the rapid aging of Andy’s fairie daughter, Adilyn? 4 | Whether you loved or loathed the premiere of The Leftovers, don’t you think HBO now owes us all (at least) a month’s supply of Lexapro? And which White Walker in this photo are you more terrified of?

6 | Does everyone on Reckless seem really horny/randy? (Especially for a CBS show?)

7 | Does anyone in Salem really believe that John “I repaired an orphanage” Alden is a witch?

8 | What seemed crazier: Mistresses‘ Savi getting a giant neck tattoo, or leaving behind half a delicious bagel (with cream cheese already applied) when Dom asked her to come to his office? And as for Scott’s shoe-fetish closet: Freaky-sexy or a bubbling cauldron of ick? 9 | Should Under the Dome‘s Barbie have rethought standing next to a wall of screwdrivers, hammers and saw blades, when he knew the magnetized dome to be yanking stuff across rooms? Meanwhile, TVLine reader Cate notes: “Under the Dome‘s new science teacher states that the center of the dome is the high school. Didn’t Joe calculate the center to be deep in the woods last year where he and Norrie found the mini-dome?”

10 | Could Switched at Birth‘s Melody really make Travis move with her? (Is she his legal guardian? Or is he 18?)

11 | Did The Fosters put the final nail in Callie and Brandon’s coffin with all the sibling mentions this week?

12 | Why did 24: Live Another Day deny us the pleasure of seeing Kate Morgan go all Sarah Walker-in-Thailand on Navarro?! Also: At what point during this breakneck-paced day has Chloe stopped to reapply her cat eyes makeup? (If she gets any more heavy handed with it, will it look like Arrow’s mask?) 13 | Did this Night Shift soldier give anyone else a Deathlok vibe? And would it be one for the history books if Scott Wolf — in addition to recurring roles on this show and TNT’s Perception — had scored a Tuesdays-at-10 trifecta with a Covert Affairs gig?

14 | Might Jason Derulo have been the least helpful guest judge in So You Think You Can Dance history? Why don’t the ballroom choreographers ever give their routines emotional (aka vote-baiting) story arcs? And wasn’t Sonya Tayeh’s opening group number one of her weakest pieces in several seasons?

15 | On the topic of Alison’s leg scar on Pretty Little Liars: Could she be the person Aria stabbed during the Season 3 Halloween episode?

16 | More doppelganger talk: First, Chasing Life lead Italia Ricci looks like Shiri Appleby. Now, Brenna’s classmate Greer looks like Claire Holt. Is this secretly a show about clones? And wouldn’t it be great if it was revealed that Scott Michael Foster’s Leo had pledged Kappa Tau while in college?

17 | Are we just not seeing what’s so paranoia-inducing about Big Brother‘s Donny? And is it too early to name Devin this season’s most bone-headed player?

18 | Are we to believe that Taxi Brooklyn‘s Leo has a “magic cab” that can slash travel times by two-thirds if need be? No wonder he’s perturbed about losing fares! Also: Doesn’t he seem to be doing most of the detective work?

19 | When Young & Hungry‘s Gabi watches Iron Chef, does she notice that none of the chefs are in stilettos? Either lose the shoes or list it as a skill on your resume.

20 | Not to get hung up on Undateable’s bar architecture again, but does it bother us that the bar’s flat, streetside exterior doesn’t jibe at all with the “zig-zag” wall of booths just inside? And how did Brent Morin (who plays Justin) not LOL multiple times during Danny and Kevin’s “karate” fight?

22 | Anyone else wishing NY Med could find a way to include fired nurse Katie Duke?

23 | Is killing one of Dominion‘s archangels as easy as stabbing them in the gut with a sword? Or does it have to be a special angel-forged blade?

24 | As wonderfully operatic as Defiance‘s closing montage was, could they maybe have cut 15 seconds from it to spend elsewhere to explain what.. the… eff Irisa’s “vision”-type thing was about??

25 | With all the chatter over who ought to sit on The View panel, can we take a second to recognize that The Wendy Williams Show is absolutely the most entertaining hour in the current daytime schedule?